The last round of the European Champions League group stage sees the threat of an early exit hanging over some of the continental giants of football – with Juventus and Bayern Munich locking horns in a do-or-die encounter in Turin.

Current champions Barcelona can technically go out, although they and Spanish rivals Real Madrid would have to suffer unlikely results to do so.

Italian champions Inter and their city rivals AC Milan both face nervous matches midweek with a real threat of dropping down into the secondary Europa League.

It is Juve and Bayern who have most at stake when they meet at the Stadio Olimpico di Torino on Tuesday.

“Tuesday is a match of extraordinary importance and Juve have shown we are ready for big games,” Juventus coach Ciro Ferrara said.

And the odds do seem stacked against Louis van Gaal’s Bayern, with Juventus enjoying home advantage and needing only a draw.

Bayern will not be baking on history however and the Bundesliga side should be boosted by the return to fitness of Dutch midfielder Arjen Robben, who will add much needed pace and control in midfield especially in the absence of injured playmaker Franck Ribery.

“It is an important match and I would like to play from the start,” Robben said.

Five-times champions Liverpool have already been eliminated after a miserable campaign in Group F and are one of nine teams who go into the final week with no hope of progressing.

Eight sides – Bordeaux, Lyon, Chelsea, Manchester United, Arsenal, Porto, Fiorentina and Sevilla – have already made sure of their places in the last sixteen.

French champions Bordeaux took one of the places in Group A, leaving twice former champions Juventus and four-times winners Bayern to scrap for the other spot.

Group F, featuring Barcelona and Inter Milan, is the most evenly balanced and the only one where all four teams still have a chance, although it would take an unlikely combination of results to remove Pep Guardiola’s team.

Barcelona, who lead with eight points, visit Dynamo Kiev, who have five, while Inter Milan and Rubin Kazan, who have six points each, meet at the San Siro.

Group C leaders Real Madrid need only to a avoid a three-goal defeat at Marseille to progress, however second-place AC Milan must win away to Swiss champions FC Zurich to make sure without depending on the other result.

Leonardo’s team have won both their Champions League away games this season and are unbeaten in their last nine away in Europe, however they lost at home to Zurich earlier in the group.

Stuttgart can pip Unirea Urziceni for the second spot in Group G if they beat the Romanians at home, otherwise their opponents will follow Sevilla through.

Despite the importance of the game, Stuttgart sacked coach Markus Babbel on Sunday, a day after a 1-1 draw against Bochum left them in 16th place in the Bundesliga.

German champions Wolfsburg host Manchester United in Group B and will qualify providing CSKA Moscow do not get a better result than the Bundesliga side in their visit to eliminated Besiktas.

Zico’s Olympiakos need a point at home to Arsenal on Wednesday to follow the English Premier League side through from Group H.

If they slip up, Standard Liege will go through in their place with a home win against AZ Alkmaar. 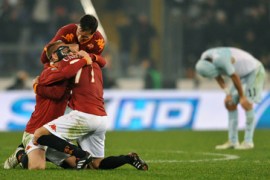 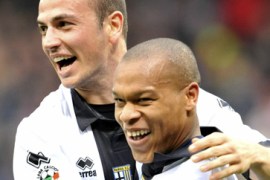 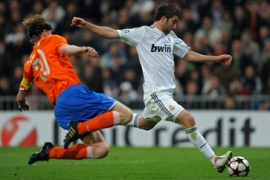