David Beckham is hoping for a repeat of his successful 2009 five-month loan season with Italy’s AC Milan.

The LA Galaxy and England midfielder passed a medical on Tuesday and has spent the past two days training with his new teammates in Italy.

Beckham will play his first game with AC Milan on January 6 against Genoa.

Beckham scored twice in 18 games for Milan from January to May 2009 while
on loan from Galaxy in the MLS. He has repeated the move in a bid to secure his place at the 2010 World Cup.

“My experience with the club was so special,” Beckham said at his first news conference since arriving back in Milan.

“It was a very special experience. It was good last time and I hope it will be as good this time.”

The 34-year-old was relishing the chance to face former club Manchester United in the Champions league last 16, particularly March’s second leg in Manchester having won the 1999 European Cup during his 10-year Old Trafford career.

“When I heard about the tie I almost cried,” said Beckham

“I love the club. It’s going to be an emotional night.

“I have never returned to Old Trafford in six years. It has always been a special place in my heart.”

It will be the first time he has played in the competition since 2007, when Real Madrid lost to Bayern Munich in the second round.

Beckham is hoping to secure his England World Cup place by again playing in Europe during the US off-season, but denied team mates might be put out if he took their place in the side.

“I am not expected to start the games. I just want to be part of the team. Players are not jealous. They were happy to see me back,” he said.

“I missed the team, the players, the fans. The group is very similar. It is the same at Manchester United, it never changes,” he added, admitting he was sorry to see the departures of Carlo Ancelotti, Kaka and Paolo Maldini since last season’s stay.

After a slow start, new Milan coach Leonardo has been praised for an attacking philosophy that has taken his team into second place, eight points behind Inter Milan but with a game in hand.

“It will be difficult because Inter and Juventus are great teams, but we have a good squad.

“All I am thinking about is the next six months here. I want to enjoy myself and help Milan win the championship.”

Milan, second in Serie A, are without long-term injury victim Massimo Oddo so new coach Leonardo has hinted he is considering playing Beckham in an unaccustomed right back role.

Such a move would be unlikely to damage Beckham’s dream of playing in a fourth World Cup in South Africa in June after England coach Fabio Capello said he would be in the squad if he was fit and in form.

“I would be happy to play in any position, in defence, in attack,” said Beckham.

“I need to work hard. It’s not guaranteed (that I’ll go to the World Cup). It’s not that easy. I have to work on my fitness.”

Still one of the most marketable footballers in the world, Beckham reeled off one decent line in Italian: “My Italian is so-so. Happy New Year not only to Milanistas but everyone in Italy.” 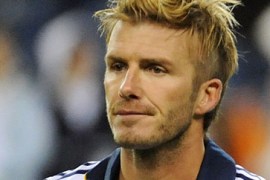 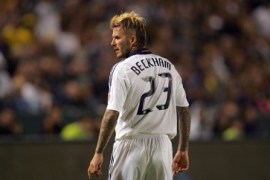