Graeme Swann and Stuart Broad led England to a decisive victory over South Africa, bowling the hosts out for just 133 as England won by an innings and 98 runs on the fifth day of the second Test at Kingsmead.

The two Nottinghamshire bowlers took nine wickets between them as South Africa, who began the day on 76 for six, were all out after 18 overs on the final day.

Swann finished off the match by trapping tailender Dale Steyn lbw for three runs to finish with figures of 5-45 and claim the man of the match award for the second time in the series.

Swann has taken 14 wickets in the first two Tests.

Trailing by 156 runs at the start of play, Mark Boucher and Morne Morkel were set the daunting task of resurrecting South Africa’s total and forcing England to bat again.

Morkel rode his luck when dropped by Andrew Strauss at slip off Swann on the 10th ball of the day, but England started well after just 11 balls when Swann forced Morkel back onto his stumps and trapped him in front for 15 with a quicker ball.

Morkel had batted well for 51 minutes on Tuesday afternoon and hit three fours.

Next to go was the last recognised batsman Mark Boucher, giving seamer Stuart Broad his fourth wicket of the innings.

Boucher gloved the ball down leg to wicketkeeper Matt Prior, but England had to wait for third umpire Steve Davis to call it out after on field umpire Amiesh Saheba originally called it not. Boucher’s 29, with three fours, came in 91 minutes.

With South Africa teetering at 108 for eight Paul Harris batted for an hour to make 36, the highest score of the innings. He hit five fours and was the ninth man out when he mistimed a flick to the leg-side off James Anderson who replaced Broad at the Umgeni End and was caught by Broad (4-43) at mid-on.

Broad finished with four for 43 in 17 overs, his burst of three for 18 on the fourth afternoon having put England well in control.

After the first Test in Pretoria ended in a draw, Wednesday’s win puts England 1-0 up in the four-match series, despite South Africa coming into the match as favourites after being a wicket shy of victory in the first Test at Centurion.

The third Test starts in Cape Town on January 3.

South Africa will reflect that that they were simply outplayed by England, whose bowlers were more effective. The Proteas top six batsmen, too, will realise that they owe the team a big effort in the third Test.

The collapse of South Africa’s batting on Tuesday afternoon when application was needed to try to erase a 231-run first innings deficit was a poor effort on a pitch still good for batting. 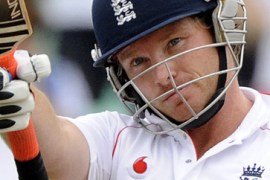 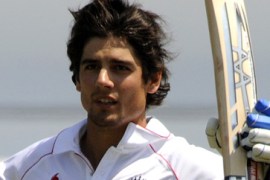 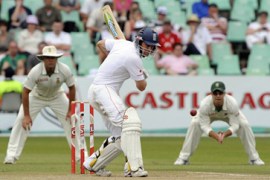 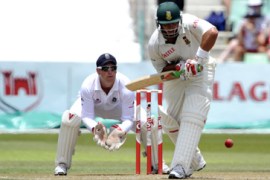