Organisers of the New Delhi Commonwealth Games have made assurances that the event will have no security concerns following reports in a London newspaper that there was ‘virtually no chance’ England would send a team next year.

Security for the Games, scheduled for October 3 – 14 next year, has been under constant scrutiny since last year’s attacks in Mumbai and the March attack on Sri Lanka’s cricket team in nearby Pakistan.

An online version of the report quoted unnamed political sources in Whitehall as saying that the formal pullout would be announced in the new year because safety could not be guaranteed.

“If you are an English athlete there is no way you are going to want to risk your life competing at the Games. We currently cannot see any way that England will be able to send a team to Delhi next year,” the Daily Telegraph quoted the unnamed source as saying.

In a statement released on Wednesday however, Hogbin said: “Our current and strong intention is to field a team for the Games in Delhi next year.

“Of course, we have a duty of care to the athletes and other team members which we take very seriously. Despite having been given extensive briefings from relevant authorities we have not received any indication that we should not participate in the
Games and we will continue to work hard to put in place the best possible arrangements for our team.”

The British goverment Department of Culture, Media and Sport also rejected the report.

“Decisions regarding participation in major sporting events are a matter for national organising committees, sports governing bodies and individual athletes,” the department said in a statement.

“It is not government’s job to determine attendance or to dictate whether individual athletes should compete. It does have a role however in offering advice to the relevant bodies when planning their attendance including security considerations.

“We would be very disappointed if a situation were to arise that led the England team to withdraw. However, with over nine months until the Commonwealth Games any such decision now would be premature.”

Suresh Kalmadi, head of the 2010 New Delhi organising committee played down any concerns in a statement.

Kalmadi said that security plans for the games had already been discussed with India’s home ministry and all the Commonwealth games associations “were satisfied with the security arrangements outlined for the games.”

Safety concerns and lax security were cited this year when England’s badminton team pulled out of the world championships in the southern Indian city of Hyderabad, and Australia refused to play a Davis Cup match in Chennai.

The Commonwealth Games are set to be the biggest multiple-sport event staged in India since the 1982 Asian Games and are expected to feature more than 8,000 athletes and officials from 71 nations and territories which comprised or were linked to the former British empire. 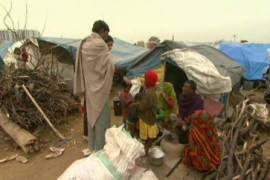