The fifth and final one-day international between Sri Lanka and India was abandoned after just 23.3 overs due to the dangerous nature of the pitch at the Feroz Shah Kotla stadium in New Delhi.

The decision led to crowd unrest and immediate recriminations for Indian officials.

Sri Lanka had toiled on the tricky surface to reach 83 for five after being put in to bat in foggy conditions before the third delivery of the 24th over from India’s rookie paceman Sudeep Tyagi, rose dangerously and flew past the face of batsman Thilina Kandamby.

The match was called off after the pitch was deemed too dangerous to play on due to unpredictable bounce.

The decision to end the match early enabled India to win the series 3-1.

As discussions continued between match officials and local organisers outside the boundary, spectators shouted slogans and abuse at the organisers.

Baton-wielding police were called in to clear the stands of spectators, some of whom had vented their anger by smashing chairs. The teams were taken away from the stadium before the abandonment was announced more than an hour after the suspension.

Tillakaratne Dilshan (31) suffered a painful blow on his left elbow off paceman Ashish Nehra, but bravely carried on after treatment before he fell to spearhead fast bowler Zaheer Khan,

Sanath Jayasuriya (20), celebrating his 21st year in international cricket, suffered a blow on his finger when he fended at debutant paceman Sudeep Tyagi as some deliveries leapt up from a good length while others kept low.

Tyagi got the ball to fly past batsman Thilina Kandamby (12 not out) after hitting a crack, forcing the batsmen to speak to the umpires.

Match referee Alan Hurst had a mid-pitch conference with the field umpires and the captains and suspended play before deciding to abandon the match.

“The decision to abandon the match was taken by myself, in consultation with the onfield umpires and both captains as it was clear that the pitch had extremely variable bounce and was too dangerous for further play,” Hurst said in a statement.

“I’d like to commend the on-field umpires and captains for continuing as long as they did in the hope that the pitch may settle down. Unfortunately, this did not happen.

Later on Sunday, confronted with mounting criticism, the Indian cricket board scrapped its pitches panel.

“The Board of Control for Cricket in India (BCCI) has disbanded its grounds and pitches committee with immediate effect,” cricket board secretary Narainswamy Srinivasan said in a statement.

Srinivasan did not say if the BCCI would take action against New Delhi’s cricket association, but local organising committee chief Arun Jetlie apologised to fans.

“We deeply regret and offer our sincere apologies, this is a serious matter that we will inquire,” said Jetlie, president of the Delhi and District Cricket Association (DDCA) and a vice president of the Indian cricket board.

“We will definitely establish what went wrong, but at this stage we do not want to indulge in any blame game and speculation.”

Nearly two months ago, a one-day international between India and Australia was played on the newly laid Kotla pitch, which India won by seven wickets.

This is the second ODI to be abandoned in India due to unfit pitch conditions after a game in Indore in 1997 between the same two teams. That limited-overs game was stopped after just three overs.

The International Cricket Council then banned Indore from hosting any international matches for two years. 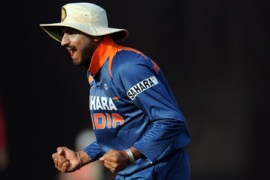