The San Diego Chargers clinched the AFC West title after Nate Kaeding kicked a 52-yard field goal in the closing seconds in the Cincinnati Bengals’ first game since the death of wide receiver Chris Henry.

With the scores level at 24-24, Kaeding hit the winning kick with three seconds left after Philip Rivers, who passed for three touchdowns and 308 yards, moved San Diego from their own 20-yard line to the Cincinnati 34 in the final minute to clinch a 27-24 win.

The Bengals had tied the game through a Shayne Graham field goal with 57 seconds left in San Diego but missed out on claiming the AFC North title and an NFL postseason spot.

“It was sort of like an empty feeling and I think a lot of people don’t understand,” said the Bengals’ Chad Ochocinco, who kneeled and said a prayer after scoring a 49-yard touchdown on a pass from Carson Palmer in the second quarter.

Henry, 26, died in Charlotte, North Carolina from injuries suffered in a fall from a pickup truck after a “domestic situation” with his fiancee, police said.

“It’s hard when you have somebody like that who you take under your wing for five years,” said Ochocinco, who had considered wearing Henry’s jersey in the game.

Chargers coach Norv Turner was delighted with the ninth consecutive win which gave the team their fourth AFC West title in a row following the Denver Broncos’ loss to Oakland Raiders.

“It’s a great job by our offensive football team using every second of the clock and getting Nate a chance,” Turner said on Sunday.

The San Francisco 49ers lost to the Philadelphia Eagles, with the Eagles also taking a playoff spot and a one-game lead over Dallas Cowboys in the NFC East title race.

Super Bowl champions Pittsburgh Steelers scored on the final play to beat the Green Bay Packers 37-36 on Sunday and avoid elimination from the playoffs in the AFC North.

The victory ended a five-game slide by the Steelers and halted Green Bay’s five-game winning streak. 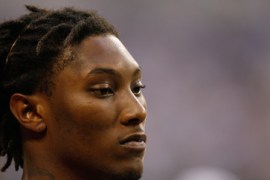 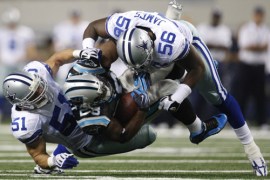