Inter Milan sprinted eight points clear at the top of the Italian Serie A with a 1-0 win over Lazio while Juventus’s miserable form continued when they lost 2-1 at home to second from bottom Catania.

Bosnian midfielder Hasan Salihamidzic had fired the hosts level from short range in the 66th minute to cancel out Jorge Martinez’s 23rd-minute spot kick for the Sicilian visitors.

Juventus remain third after their third consecutive defeat in all competitions with 30 points from 17 games, nine points behind Inter.

Samuel Eto’o tapped Inter ahead on the rebound in the 14th minute at a sub-zero San Siro after Lazio keeper Fernando Muslera had palmed out a header by the Cameroonian.

Lowly Lazio rallied but created few clear chances for all their possession.

Champions Inter go into the winter break with 39 points from 17 matches.

AC Milan are second with 31 points and a game in hand after their visit to Fiorentina on Saturday was one of four of this weekend’s fixtures to be postponed by heavy snow.

Roma beat Parma 2-0 at home to join the promoted side in joint fourth thanks to second-half goals by Nicolas Burdisso and Matteo Brighi.

The pressure on Juve coach Ciro Ferrara now risks becoming intolerable after his men lost 3-1 at Bari last weekend and exited the European Champions League with a 4-1 drubbing from Bayern Munich but he said he had no intention of quitting.

“Our ship is in the middle of a storm and the only way out is staying united,” Ferrara was quoted as saying by La Gazzetta dello Sport‘s website.

“The thought of quitting has not crossed my mind. If there were just one problem we’d have probably solved it.

“There are a series of things that aren’t right. We know that we haven’t done as well in the last three months as at the start of the season.

“But the solution is not on the transfer market.”

“We have confidence in Ciro and his staff,” Blanc said.

The team got a hostile reception from some of their supporters on Sunday.

The team bus was hit by an egg on its way to the ground.

Some fans stood with their backs to the pitch during the game and media reported that racist chants could be heard from the stands.

Uruguayan Martinez had to take the penalty, awarded for a tug by Tiago on Nicolas Spolli, twice after the referee ordered it be repeated for players entering the box.

Juventus were at sea for a while, their troubles exemplified by Brazilian midfielder Felipe Melo, a disappointment since moving from Fiorentina in a big-money close-season deal, being replaced by Salihamidzic on 32 minutes.

They had a few good chances after the break before Salihamidzic equalised only to be sunk three minutes from time by Izco.

Catania now share the bottom spot with Siena, who lost 1-0 at Palermo, after starting the weekend propping up the table on their own.

Sampdoria’s slide down the table continued as they lost 3-1 at Livorno.

Sunday’s matches between Genoa and Bari, and Udinese and Cagliari were hit by the weather along with Milan’s clash and Bologna’s home game against Atalanta. 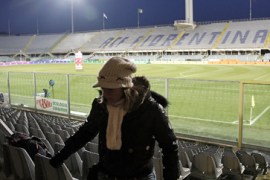 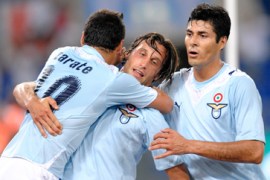 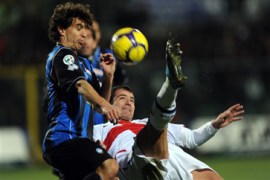 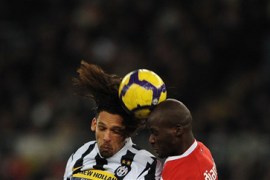