The decision will no doubt be perceived as ‘payback’ for France’s controversial qualification to the World Cup.

The World Cup winners in 1998 and finalists in 2006 will not be a seeded team at the 2010 World Cup, setting up the potential for group stage clashes with teams such as Brazil or Spain.

The seeding only fuels widespread media speculation that France would be ‘punished’ by Fifa after persistent protests by the Irish Football Association.

Fifa general secretary Jerome Valcke has insisted the decision not to seed France is purely based on world rankings and has no connection with the controversy over Thierry Henry’s infamous ‘handball’ goal against Ireland.

Valcke said there had been an agreement within the organising committee to base the seedings on the Fifa world rankings for October.

He insisted this had been done with the agreement of Uefa president Michel Platini of France who was very keen, for the sake of fairness, for it to be done when European teams had all played the same number of qualifying games.

Valcke said this agreement pre-dated the infamous play-off in Paris when France scored an equaliser against Ireland after Thierry Henry had blatantly handled before setting up the William Gallas goal which put France into the finals.

But it places the 2006 finalists in a precarious position ahead of the World Cup draw on Friday.

Hosts South Africa will be seeded in Group A, allowing them to open the World Cup at Johannesburg’s Soccer City on June 11.

The other seeded teams in pot one are Brazil, Spain, the Netherlands, Italy, Germany, Argentina and England.

There will be four pots in all, allowing organisers to set up eight groups in the opening rounds.

The potentially toughest group could consist of four of the current top 14 teams in the world – Spain, France, Cameroon and the United States.

The final pot is made up of the eight remaining teams from Europe – Denmark, France, Greece, Portugal, Serbia, Slovakia, Slovenia and Switzerland.

The geographical division was made to guarantee a more global representation of teams in all the groups.

The draw will also make sure that South Africa cannot play another African team in the first round. There are fears that the hosts might not make it past the first round, denting the chances of success for the first World Cup held in Africa.

Overall, Fifa decided it wanted to reward recent play more than past performances in the World Cup, hence its reliance on the latest ranking results.

“It is to recognise their qualifying campaign,” Valcke said.

“Holland had a great qualifying campaign (and) Spain is the first team having won all their matches.”

In October, France were ninth, two places below England, the lowest seeded team. Had the November rankings been taken into account, France would have jumped ahead of England and Argentina. 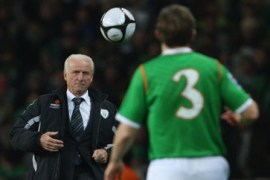 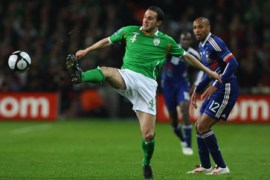