Manchester United were humbled 3-0 at Fulham to give Chelsea the chance to open up a six-point lead at the top of the English Premier League – as Manchester City manager Mark Hughes was sacked after his side’s 4-3 win over Sunderland.

Roberto Mancini has been announced as the new boss at Easlands following Welshman Hughes’s departure.

At Fulham meanwhile, Danny Murphy opened the scoring for the West London side as the former Liverpool man got one over on the boo-boys in the United away support.

Bobby Zamora and Damien Duff wrapped up three points for Fulham at Craven Cottage to move Fulham up to ninth.

Liverpool lost 2-0 to Portsmouth in the early game, Aston Villa beat Stoke 1-0 and Blackburn lost 2-0 at home to Spurs.

Arsenal hope to continue their resurgent tile challenge when they face Hull City in the late match.

Liverpool’s miserable season hit a new low as Javier Mascherano was sent off in the defeat at Fratton Park.

Algerian defender Nadir Belhadj rifled in an unstoppable volley in the first half before Frederic Piquionne capped a good afternoon for Portsmouth manager Avram Grant late on.

Rafael Benitez’s side, who are already out of the European Champions League, have won just four of their last 17 matches in all competitions and face a desperate fight to salvage a place in the English Premier League’s top four.

The Reds, who are five points adrift of fourth place ahead of Saturday’s later games, fell behind in the 33rd minute when Belhadj lashed a ferocious shot past Jose Reina from a tight angle for his first goal of the season.

That strike was the 500th in the Premier League this season and Liverpool defender Daniel Agger should have added to that tally, but wasted his side’s best chance when he headed over from close range.

A dismal day for Liverpool got even worse when Argentine midfielder Mascherano was dismissed by referee Lee Mason for a lunge on Tal Ben Haim just before half time.

French striker Piquionne piled on the misery for Liverpool boss Benitez, who is certain to face more heavy criticism after this defeat, when he finished off a Kevin-Prince Boateng move in the 82nd minute with another angled volley.

Portsmouth, celebrating their second win under Grant, move level on points with second bottom West Ham, but remain behind the Hammers on goals scored.

Fulham, who beat United 2-0 at home last season, took the lead in the 22nd minute when former Liverpool midfielder Murphy dispossessed Paul Scholes and went on to let fly with a 25-yard shot that beat Tomasz Kuszczak.

Seconds into the second half, Fulham were 2-0 up after Zamora lashed in a half-volley following a knockdown from Clint Dempsey.

Zamora then set up Duff, who volleyed home 15 minutes from time.

Arsenal are two points behind United in third after Brazilian midfielder Denilson’s delightful free kick set them on the way to a 3-0 victory over Hull City.

They had to survive a Geovanni missed penalty after the break before adding two more goals through Eduardo da Silva and Abou Diaby. 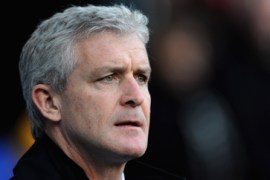 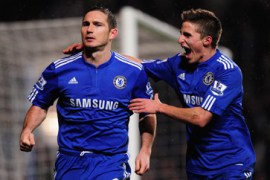 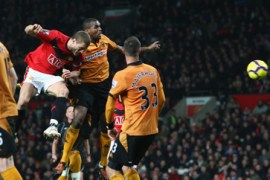 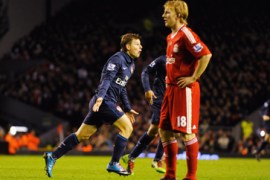