The bodies of two men believed to have been climbing companions of former Japanese Formula One driver Ukyo Katayama have been found on Mount Fuji.

Japanese media reported the bodies were discovered by a police rescue team on Saturday, a day after Katayama was picked up after making an emergency call.

Katayama’s companions were feared dead after their tents blew away and the 46-year-old former racing driver informed police they may have perished.

The three men started climbing Japan’s sacred mountain on Thursday as part of preparations for an expedition to the South Pole.

Temperatures on the 3,776-metre mountain had dropped below minus 25C before dawn on Friday.

The trio pitched tents at around 2,750 metres.

Japan’s Kyodo news agency reported that police were continuing to question Katayama, who told them his companions had “drawn their last breath” after wind tore their tents away.

Katayama himself was rescued by police shortly after noon on Friday at around 2,200 metres while attempting to make the tricky descent alone.

Katayama raced in 95 Formula One races – mostly for the Tyrrell team between 1992 and 1997 – finishing fifth twice and sixth once in his best season in 1994. 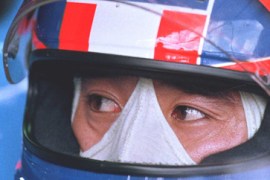