Cincinnati Bengals receiver Chris Henry has died one day after falling out of the back of a pickup truck in what authorities described as a domestic dispute with his fiancée.

The 26-year-old NFL star was rushed to the hospital on Wednesday after being found on a residential road.

Charlotte-Mecklenburg police said the dispute began at a home about a half-mile away, and Henry jumped into the bed of the pickup truck as his fiancée was driving away from the residence.

Police said at some point when she was driving, Henry “came out of the
back of the vehicle.” They wouldn’t identify the woman, and no charges were
immediately filed.

Police spokeswoman Rosalyn Harrington said homicide detectives have been
assigned to the case but had no further information. Police have not released the 911 tapes, and Harrington wouldn’t say if the woman was present at the scene when police arrived.

Henry was engaged to Loleini Tonga, and the couple had been raising three children.

Henry became a vital part of Bengals offence as a rookie, helping the Bengals reach the playoffs in 2005 with his ability to run past defenders to grab long passes.

In the final month of the season, he also showed his other side, getting arrested for marijuana possession. After a playoff loss to Pittsburgh, he was arrested on a gun charge in Florida.

Commissioner Roger Goodell suspended both in 2007 – Jones for a full season, Henry for half of it – as part of a toughening of the league’s conduct policy.

When Henry was arrested for a fifth time following that season on an assault charge, the Bengals decided they’d had enough. At his arraignment on April 3, 2008, Municipal Court Judge Bernie Bouchard called Henry “a one-man crime wave.”

He was released by the Bengals the same day and career seemed finished.

Then, Bengals owner Mike Brown – who refers to himself as “a redeemer” – changed his mind and gave him another chance.

This time, Henry seemed determined to stay out of trouble. After only 19 catches and two touchdowns in 12 games in the 2008 season, he set about making himself a topflight receiver again. He got into top shape and worked out with teammates in the offseason, showing more resolve than at any point in his career. 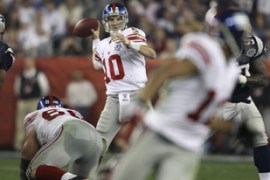 The win is a huge upset for the Patriots, ending their year-long winning streak.