Chelsea stretched their lead over Manchester United at the top of the English Premier League to three points despite a 3-3 draw with Everton after the defending champions lost 1-0 at home to Aston Villa.

Didier Drogba scored twice as Chelsea recovered from an early own-goal by goalkeeper Petr Cech, but Everton fought back to equalise twice and secure a valuable point in their efforts to move away from the bottom of the standings.

Chelsea had not conceded a goal at Stamford Bridge since the opening day of the season in August.

They have now lost their perfect home record and have not won for four matches, but were helped by United’s fourth loss of the season.

Gabriel Agbonlahor scored for Villa in the 21st minute with a header from Ashley Young’s curling left-wing cross.

“Who can say we are in crisis?” Chelsea manager Carlo Ancelotti said.

“I want to be objective and, when I look at the game and the way we played, I saw that my team played very well.

“We still have the same chance to win the title.

“It will be a long race until the end of the season. The Premier League is very competitive.”

Manchester City equalised three times to hold Bolton 3-3 and draw for the eighth time in nine Premier League games, while Tottenham’s hopes of staying in contention for Champions League qualification took a big hit with a 1-0 loss against visiting Wolverhampton Wanderers.

Chelsea were undone by poor defending at set pieces.

Yakubu Ayegbeni had only just come on as a substitute when he made it 2-2 in first-half injury time following John Terry’s failure to clear a throw and, although Drogba restored Chelsea’s lead in the 59th minute, Louis Saha scored for 3-3 four minutes later.

Drogba was helping out in defence but headed a free kick by Johnny Heitinga into Saha’s back and the ball bounced over Cech and into the empty net.

“To come here and get a draw, especially with the players we played, is terrific,” Everton manager David Moyes said of his injury-hit side.

“We deserved it. We never gave in when we went behind.”

Everton had led in the 12th when Saha’s header from a free kick hit the post and rebounded into the net off Cech’s back. Ricardo Carvalho and Frank Lampard set up Drogba for an equaliser five minutes later, and Nicolas Anelka made it 2-1 in the 23rd with a close-range shot into the roof of the net.

Drogba has now scored 18 goals this season and Anelka has seven but Chelsea have conceded 10 goals in four games.

Villa rarely threatened apart from when Agbonlahor hit his eighth league goal of the season. United striker Wayne Rooney had plenty of possession but was below the form that brought him 11 Premier League goals so far this season.

United brought on Michael Owen, Dimitar Berbatov and Darron Gibson in search of a goal and continued to dominate without reward. Berbatov was unmarked in front of goal but completely missed Michael Carrick’s cross and Nemanja Vidic had a header blocked on the line.

United have 34 points to Chelsea’s 37. Villa’s first win at Old Trafford since 1983 lifted them two places to third, although Arsenal could retake third if they beat Liverpool in Sunday’s only game.

Carlos Tevez scored two of Manchester City’s goals to take his tally to five in the Premier League, while Tottenham had 83 minutes plus injury time to recover from a third-minute goal by Wolves striker Kevin Doyle but still lost a third home game of the season.

Birmingham moved to within three points of Spurs with midfielder Lee Bowyer scoring for a 1-0 win over former club West Ham, Fulham drew 1-1 at Burnley and last-place Portsmouth equalised in the final minute for a 1-1 draw at Sunderland.

But Portsmouth’s Younes Kaboul got a second yellow card for removing his shirt in celebration of his goal and was sent off.

In the other games, Blackburn drew 0-0 with Hull and Maynor Figueroa scored from halfway to help Wigan to a 2-2 draw at Stoke. 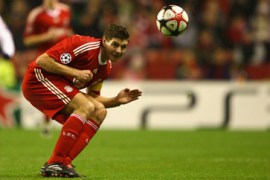 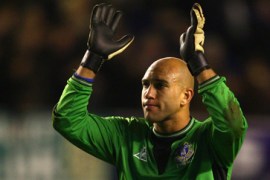 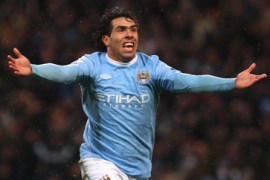 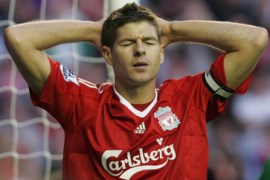