Chinese superstar Liu Xiang won gold in the 110-metre hurdles as expected at the East Asian Games in Hong Kong, comfortably winning the field in a relatively slow time of 13.66 seconds.

The former Olympic and world champion is returning from a career – threatening foot injury, but was never in danger of losing.

The 26-year-old was a surprise gold medallist at the Athens Olympics in 2004, then broke the world record in 2006, but shocked China by walking away from his first heat at the Beijing Olympics last year with a foot injury.

Xiang launched his comeback in September after surgery to repair his right Achilles’ tendon, but his slow time at the Games are not an indication of whether he can recapture his old form and get back under 13 seconds.

The East Asian Games are held every four years among athletes from a handful of Asian countries including China, Guam, Japan, North and South Korea, Macau, Mongolia, Taiwan and hosts Hong Kong.

The Games have a relatively low profile, and China is expected to dominate with Japan, South and North Korea providing stiff competition.

Liu was happy with his performance and holds ambitions of getting under 13 seconds, although breaking the world record may be a tall order. Liu set a world record of 12.88 seconds in 2006. Cuba’s Dayron Robles took 0.01 seconds off his mark in 2008.

Liu set a time of 13.15 in his first comeback race in Shanghai in September, then 13.34 at China’s National Games the following month, and 13.50 at the Asian Athletic Championship last month.

Asked about his goals for the London Olympics in 2012, Liu said he wanted to compete because it could be his last Olympics.

One of China’s biggest sports stars, Liu is the biggest attraction at the Games. About 100 reporters attended his post-race press conference.

The partisan crowd at Tseung Kwan O Sports Ground in suburban Hong Kong cheered enthusiastically when Liu entered the stadium, warming up in a white T-shirt printed with the Chinese character for “xiang,” which translates to flight.

As widely expected China has been dominating the Games, picking up nine gold medals at the track and field events on Friday – the women’s long jump, the women’s 3,000-metre steeplechase, the men’s shot put, the men’s 5,000 metres, the women’s discus throw, the women’s 100-metre hurdles, the men’s and women’s 400 metres and the decathlon. 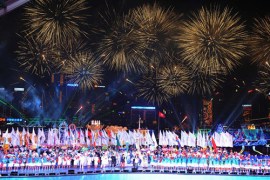 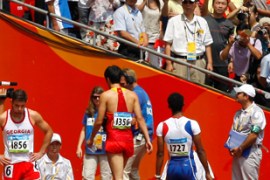 China faces up to Liu’s pain

Olympic hosts come to grips with human frailties of its hurdling superstar. 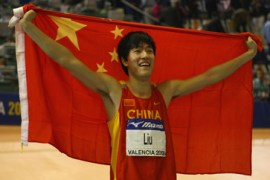 The Olympics’ hosts will have its largest ever team at the Games.