Ukrainian boxer Vitali Klitschko will defend his WBC heavyweight title for the third time this year with his trainer confident the boxer is in ‘top form’.

Klitschko (38-2 with 37 knockouts) outclassed the previously unbeaten Arreola in Los Angeles before the Mexican-American’s corner wouldn’t let him come out for the 11th round.

Klitschko was confident ahead of Saturday’s clash at the pre-fight press conference in Bern.

“This is even better than my last successful title defence against Cris Arreola in September,” he said.

Trainer Fritz Sdunek said Klitschko has sparred 100 rounds since and is “physically and mentally in top form.”

“If Kevin Johnson does what he promises, at least the fight will go the full 12 rounds,” Sdunek said.

Durable and technically sound, the Georgia-based, New Jersey-born Johnson (22-0 with 1 draw, 9 KOs) earned his title shot by stopping Devin Vargas in May.

“To all my fans back in the US, especially Atlanta and Asbury Park, pay attention, keep your eyes glued to the TV and watch me do what I do,” said Johnson, who told his 10-year-old daughter Fatimah he would become world champion.

Johnson weighed in at 243 pounds on Friday – 4lbs lighter than the champion.

Johnson is ranked No. 10 heavyweight contender by respected magazine Ring, with Klitschko the top-rated challenger to his younger brother Wladimir who holds the IBF and WBO belts. The brothers have promised never to fight each other.

The WBA belt is held by Britain’s David Haye who won a points decision against giant Russian Nikolay Valuev in Nuremberg, Germany, last month and has a mandatory first defence against John Ruiz of the US.

Haye called out Vitali Klitschko this week, challenging him to take tougher fights.

“There are probably one million dudes in America called Kevin Johnson, and beating one of them doesn’t make you an all-time great heavyweight,” Haye said.

“They may be big in Switzerland, but so are yodelers, and no one wants to watch them fight.”

More than 17,000 tickets have been sold for the bout in the Swiss capital’s PostFinance Arena. 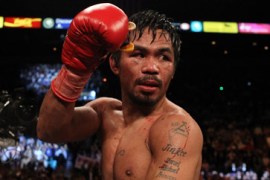 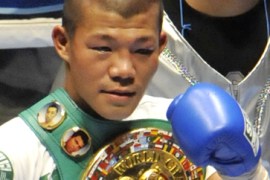