The United States Justice Department has declined to back a posthumous pardon for black heavyweight boxing champion Jack Johnson.

The former champion was imprisoned nearly a century ago because of his romantic links to a white woman.

The boxer was convicted in 1913 of violating the Mann Act, which made it illegal to
transport women across state lines for immoral purposes.

The law has since been heavily amended, but has not been repealed

In a letter obtained on Thursday by The Associated Press, the department’s pardon attorney, Ronald L. Rodgers, told Congressman Peter King that the Justice Department’s general policy is not to process posthumous pardon requests.

In cases like Johnson’s, given the time that has passed and the historical record that would need to be scoured, the department’s resources for pardon requests are best used on behalf of people “who can truly benefit” from them, Rodgers wrote.

The resolution was sponsored by Obama’s 2008 opponent, Senator John McCain.

The letter from Rodgers was in response to one that King and Senator John McCain sent to President Barack Obama in October urging a pardon.

In that letter, the two lawmakers noted that both houses of Congress passed a resolution calling for a presidential pardon and said they hoped the president would be eager to “right this wrong and erase an act of racism that sent an American citizen to prison.”

Rodgers wrote that notwithstanding the department policy, Obama still has the authority to pardon whomever he wishes, “guided when he sees fit by the advice of the pardon attorney.”

And he did cite two cases of posthumous pardons: President Bill Clinton’s 1999 pardon of Lt. Henry O. Flipper, the Army’s first black commissioned officer, who was drummed out of the military in 1882 after white officers accused him of embezzling $3,800 in commissary funds; and President George W. Bush’s 2008 pardon of Charles Winters, who was convicted of violating the Neutrality Act when he conspired in 1948 to export aircraft to a foreign country in aid of Israel.

In Winters’ case, Rodgers said, the pardon request was not processed by Justice’s Office of the Pardon Attorney, due to the department’s posthumous pardon policy.

King said in a telephone interview that he and McCain probably will continue to urge Obama to issue the pardon.

“What they’re doing here is bucking it back to President Obama,” King said.

“So I would respectfully urge him to grant the pardon. This is the president’s call.”

The White House had no immediate comment on whether Obama would consider the request.

Johnson became the first black heavyweight champion on December 26, 1908, after police in Australia stopped his 14-round bout against the severely battered Canadian world champion, Tommy Burns.

That victory led to a search for a “Great White Hope” who could beat Johnson. Two years later, Jim Jeffries, the American world titleholder Johnson had tried for years to fight, came out of retirement but lost in a match called “The Battle of the Century,” resulting in deadly riots.

In 1913, Johnson was convicted of violating the Mann Act. The sentencing judge acknowledged a desire to “send a message” to black men about relationships with white women.

After Johnson’s conviction, he fled the country, but agreed years later to return and serve a 10-month jail sentence. 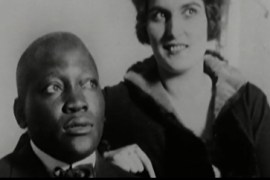 Video: Pardon sought for US boxer

McCain calls for the late black heavyweight boxing champion to be exonerated.