Master spinner Mutthiah Muralitharan can deny India top spot in the world rankings when he plays his last overseas Test in Mumbai on Wednesday.

Sri Lanka’s world record holder for wickets in Test and one-day cricket will retire from the long format next year.

And the tourists hope their veteran off-spinner can shake off his modest form and bow out with a first Sri Lankan Test win on Indian soil.

The 37-year-old had a rough time in the first two Tests, managing just five wickets at the cost of 396 runs on unhelpful pitches on his fourth tour of India.

Sri Lanka lost last week’s second Test in Kanpur by an innings and 144 runs, falling behind in the series 1-0 after a high-scoring first match ended in a draw in Ahmedabad.

India can move past South Africa and Sri Lanka as the world’s top-ranked Test side if they win in Mumbai.

“Murali is still the spearhead of our attack and we back him 100 per cent to turn it around and win the match for us,” Sri Lanka captain Kumar Sangakkara said on Tuesday.

The match will be played at the Cricket Club of India (CCI) Brabourne Stadium for the first time in 36 years as the regular venue, Wankhede Stadium, is under renovation for the 2011 World Cup.

India captain Mahendra Singh Dhoni played down the significance of the rankings, saying that talking about it would affect the team’s approach.

“Winning the series is important, and at the end of the day it will reflect on the rankings,” he said.

“We are not thinking of the rankings because you don’t really want to play under pressure, you want to play your natural game.”

India’s chances of beating the Sri Lankans have suffered a blow with in-form opener Gautam Gambhir, the world’s top-ranked batsman, pulling out of the match to attend his sister’s wedding.

The left-hander scored centuries in each of the first two Tests and shared a 233-run opening stand with Virender Sehwag in Kanpur.

Murali Vijay, an exciting but inexperienced batsman who played his only Test against Australia last year, will replace him.

Former Mumbai player and Brabourne groundsman Milind Rege predicted the wicket would offer a little more to the bowlers than those in Kanpur and Ahmedabad.

“If it is a dry wicket, it will crumble immediately. It will bind the soil. It’s a December sun and it is not hard.”

Dhoni said he was looking forward to finally playing at the ground.

“Playing at the CCI is special, this will be my first game here,” he said. 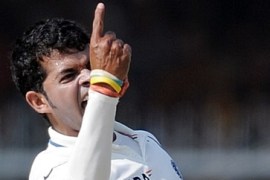 Paceman grabs six wickets as Sri Lanka all out for 229 then 57-4 following on in Kanpur. 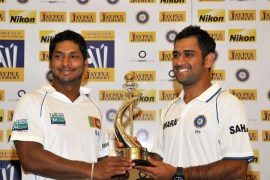