Barcelona’s Lionel Messi won France Football magazine’s Ballon d’Or award with a record margin to notch a hat-trick of victories over second-placed Cristiano Ronaldo on and off the pitch.

Argentine Messi outshone the Portuguese winger in the European Champions League final in May, scoring in a 2-0 Barca win over Manchester United.

He helped Barca to a 1-0 win over Ronaldo’s new side Real Madrid on Sunday, and on Tuesday clinched the top individual award in Europe by 240 points over the Portuguese – who won the Ballon d’Or last year.

“Honestly, I knew that I was among the favourites because Barcelona had a fruitful year in 2009,” Messi was quoted as saying by the magazine.

“But I didn’t expect to win with such a margin. The Ballon d’Or is very important to me. All the players who won it were great players, and some great players never won it.”

The 22-year-old Messi, the first Argentine to win the trophy, was the top scorer in last year’s Champions League with nine goals, including his superb header in the Rome final.

He became the sixth Barcelona player to take the award and the first since Brazilian Ronaldinho in 2005.

Hailed by Argentina great Diego Maradona as his successor, Messi won an unprecedented treble in Spain last season with Barcelona as the Catalan side swept the Champions League, the Spanish title and the Copa del Rey.

Barcelona had three players in the top five, with Andres Iniesta taking fourth ahead of former Barca player Samuel Eto’o.

In an outstanding season, Messi netted 38 goals in 51 games in all competitions.

After starting club football in 1995 at Argentina’s Newell’s Old Boys, Messi, who suffered from a growth hormone deficiency when he was a child, joined Barcelona’s Under-14 team in 2000 after the Spanish club offered to pay for his treatment.

The 5ft7in was part of the Argentina team at the World Cup 2006 before claiming the Olympic gold in Beijing in 2008.

France Football’s award was decided by an annual poll of football journalists from a shortlist of 30 players. 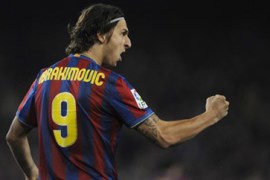