Disgraced track star Marion Jones is training for a comeback – as a top women’s basketball star.

San Antonio Silver Stars coach Dan Hughes confirmed on Monday that Jones has been training with his assistants to possibly play in the WNBA in the United States, more than a year after the 34-year-old was released from federal prison for lying about her doping use.

The New York Times first reported that Jones has been working on her skills and conditioning in San Antonio since October.

Jones told the newspaper she received a call in May from someone in the NBA asking if she might play in the WNBA.

“I thought it would be an interesting journey if I decided to do this,” Jones said.

Jones played college basketball at North Carolina, where she was the starting point guard on the Tar Heels’ national championship team in 1994.

She told the Times that she hopes to play in Europe this winter and in the WNBA next season.

Jones was released in September 2008 from a Texas federal prison after completing most of her six-month sentence for lying about doping and her role in a cheque-fraud scam.

After long denying she had ever used performance-enhancing drugs, Jones admitted in federal court that she used a designer steroid from September 2000 to July 2001.

She was stripped of three gold medals and two bronzes she won at the 2000 Sydney Olympics.

Hughes said his assistants haven’t briefed him on Jones’ skill level or whether she has shown the ability to play in the WNBA.

But he applauded Jones for trying, and said her prison time or admission of steroids use wouldn’t factor into his decision about signing her.

“I deal with people where they are right now,” Hughes said.

“If she’s interested in playing, great for her. The past is the past.”

Jones said she thinks she can be an asset to a WNBA team.

“It’s important for people to know that it’s possible to make a mistake in your life, but it’s what you do after the mistake that people are going to remember you by,” she said. 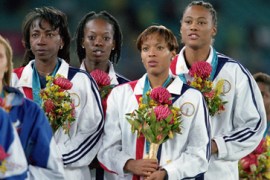 The IOC decides to strip Marion Jones’ relay teammates of their gold. 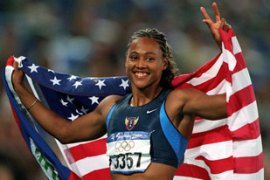 Judge tells Marion Jones that her sentence will serve as an example to others. 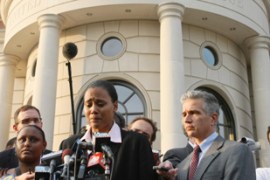