Canada’s downhill world champion John Kucera is in danger of missing the Winter Olympics in Vancouver after breaking his leg in a high-speed fall.

Kucera was airlifted from the Lake Louise course in Alberta to a nearby hospital after crashing into the safety netting on Sunday during the season-opening World Cup super-G, won by his teammate Manuel Osborne-Paradis.

“John Kucera has a left leg fracture that will require surgery,” said Alpine Canada in a statement.

There was no immediate comment on whether he would be able to compete at the Olympics, starting in February.

The 25-year-old Kucera was regarded as one of his country’s top medal hopes for Vancouver and his injury overshadowed Osborne-Paradis’ first World Cup super-G win.

“It’s amazing but just too bad this wonderful day has been overshadowed by John’s crash,” Osborne-Paradis said.

“We just have to hope that everything is fine. We are going to miss having such a great skier on our team.

“But we have a strong team in that you have to fight just to qualify for an Olympic spot.”

Osborne-Paradis, who won a World Cup downhill event in Norway last season but had never finished better than 13th in super-G, clocked a winning time of one minute 32.93 seconds. 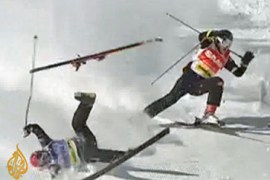