Australia swept past Wales 33-12 at the Millennium Stadium in Cardiff to end their European tour on a high note and shrug off last week’s shock loss to Scotland.

Three tries inside the first 25 minutes from centre Digby Ioane and forwards James Horwill and David Pocock were ultimately too much for Wales, who clung on bravely but missed opportunities early in the second period to narrow the 23-12 half-time deficit

Wales flyhalf Stephen Jones kept his team in the game with two more penalties, but Matt Giteau kept scoring at the other end and replacement Tatafu Polota-Nau rounded off a sweeping attack for Australia’s fourth try late on.

In the later game New Zealand outclassed France 39-12 with an impressive mix of power and skill to end in spectacular fashion in Marseille.

Matt Giteau recovered from his poor performance last week to win the man-of-the-match award with 13 points and some sparkling open play.

“People in the Australian media think we’re not and that we’re overpaid but we’ve got a lot of pride.

“We were disappointed by last week’s game.”

Australia effectively removed any chance of a second straight loss with their early blitz.

Giteau, who missed a last-minute conversion that would have beaten Scotland, had already put the Wallabies ahead with the first of his three penalties when Ioane touched down in the eighth minute.

Restored to the side at centre after recovering from a shoulder injury, Ioane got on the end of a kick from Giteau, who managed to get the ball away despite seeing a big tackle coming his way.

Leigh Halfpenny kicked from halfway to trim the deficit to 8-3 but Horwill touched down in the corner after some slick passing in open play and Pocock stretched to place the ball over the line to make it 20-6.

“We thought we may as well go out there and throw the ball around. We had nothing to lose.”

Jones got Wales back to 23-12 down at half-time and pressured Australia for the first 15 minutes of the second period, but lost their best chance of a try.

Centre Jamie Roberts passed rather than going for the line following his break and Tom James was smothered after hesitating.

Australia moved play up to the other end, spread the ball across field with two passes and Polota-Nau found the gap to go through and score.

Jonathan Sexton kicked all of Ireland’s points to give his team a 15-10 win over world champions South Africa at Croke Park in Dublin.

The 24-year-old flyhalf landed five of his seven kicks to justify his selection ahead of record scorer Ronan O’Gara and give his side a third straight win over the Springboks.

South Africa did score the only try of the match through Schalk Burger but were lucky to keep 15 men on the field for the whole game as their discipline crumbled under pressure.

Ireland have now completed their November internationals unbeaten. They drew 20-20 with Australia and defeated Fiji 41-6.

South Africa head home with only a win over Italy to show from four Tests.

Ireland dominated South Africa in the second half to overturn a 10-6 half-time deficit, taking about two thirds of possession and three quarters of the territory to force the World Cup holders into elementary errors.

Although the Irish struggled to get the try their pressure merited, Sexton succeeded with enough of his penalties for a win that was clinched when captain Brian O’Driscoll halted a late South Africa attack with a crunching tackle.

Morne Steyn had a poor match for South Africa, missing several kicks and struggling with his distribution.

His high tackle gave away the 48th-minute penalty that allowed Sexton to kick Ireland to within a point of South Africa and then kicked straight into touch to concede a lineout that put his side under more pressure.

The All Blacks, who beat Wales, Italy and England in their previous outings, ran in five tries on Marseille’s Velodrome pitch and superb flyhalf Dan Carter did the rest by kicking 14 points from four conversions and two penalties.

France, who had posted wins over world champions South Africa and Samoa, could not match a ruthless display by the visitors and had to be content with three penalties by scrumhalf Julien Dupuy and a drop goal from flyhalf Francois Trinh-Duc.

While the Springboks slumped to defeats by France and Ireland, New Zealand used their autumn Tests to strongly suggest they were back on top of the rugby world and will leave full of confidence to prepare for next year’s World Cup on home soil. 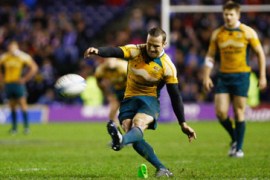 ‘The death of Australian rugby’