Such was the power and aura of Rafael Nadal six months ago that former US ace Andre Agassi predicted the Spaniard would complete a calendar Grand Slam in 2009.

Half a year on, Nadal is the first to exit the ATP World Tour Finals in London after losing his second round-robin match to Nikolay Davydenko on Wednesday.

It followed his defeat to Robin Soderling in his first match in London, and summed up a year in which he has fought injury and made only stuttering progress in his comebacks.

Roger Federer has been the main beneficiary, the Swiss regaining confidence after his understudy as world number one blasted him off the court in several gripping encounters in 2008.

But far from emulating Rod Laver’s slam achievement set 40 years ago, Nadal has failed to win a title since May.

He is not the only one battling for form.

US Open champion Juan Martin del Potro has had a terrible time since ending Federer’s run of victories at Flushing Meadows, while Novak Djokovic – Nadal’s next opponent in London – was crushed 7-6 6-1 by Swede Soderling on Wednesday.

For Nadal, the year that started with much promise when he captured the Australian Open crown before adding another four titles in the space of 14 weeks, ended with a whimper by the Thames.

Two straight set defeats means the Spaniard has no chance of progressing any further in the elite eight-man event even if he beats Djokovic in his final round robin match on Friday.

Despite his barren spell over the past six months, he had arrived in London with a realistic chance of grabbing the year-end top ranking from French Open and Wimbledon champion Federer.

But Nadal barely looked like a man capable of climbing to the summit of his sport in his match against Davydenko and he said reclaiming the world number one ranking had not been his top priority this week.

“I didn’t come here to be number one. It wasn’t my goal because I’m not playing well enough to be number one right now,” he said after his 6-1 7-6 defeat by the Russian.

“If I’d won the Masters (ATP Finals), I would have arrived at next week’s Davis Cup (final against the Czech Republic) with more confidence. I would prefer to get there in my best moment and I’m working hard to get my confidence back.”

Lack of confidence is what Nadal has struggled with ever since his four-year reign at the French Open was abruptly ended by Soderling in the Roland Garros fourth round.

He then missed the defence of his Wimbledon title as he tried to overcome a bout of tendinitis and returned to the tour in August, though has failed to dominate as he once did.

While other top players like Federer and Djokovic look forward to taking a break from the rigors of the tour, Nadal has no intentions of putting his feet up during the off season.

“I’ve had enough breaks this year. Too much, in my opinion,” he smiled about his eight-week absence from the tour.

“I don’t know how far I am from my best. The important thing is when this change happens, I’ll be ready for it.” 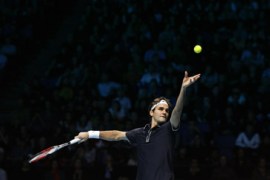