Gonzalo Higuain scored the only goal as Real Madrid beat FC Zurich to go top of European Champions League Group C – only for the men in white to be whistled off the pitch by their fans.

The Argentine striker was played through by Kaka to score after 21 minutes but despite their dominance Real struggled to add to their lead.

Real go to 10 points, two clear of AC Milan, who drew 1-1 at home to Marseille in the other group match on Wednesday.

Marseille are a further point behind in third, with all three still able to qualify for the knockout phases with one match remaining.

In Group D, Chelsea are guaranteed top spot after beating Porto while Atletico Madrid drew at Apoel Nicosia to move towards the consolation prize of a Europa League place.

At the Bernabeu the biggest cheer came when Cristiano Ronaldo replaced Raul midway through the second half, returning to action after two months out with an ankle injury.

Real camped on the edge of the Zurich area and it was Kaka who prised open their massed ranks.

The Brazilian, who had already had a long-range effort saved, danced past two players before slipping the ball into the area for Higuain. The Argentine beat Johnny Leoni with a low shot.

Xabi Alonso stung Leoni’s hands with fierce drive and Marcelo cracked a superb volley against the post at a corner, but there was little else to cheer a chilly stadium.

The appearance of Ronaldo to warm up just after the break brought the home fans to life briefly, and he was roared onto the pitch after 67 minutes.

In the closing stages substitute Rafael van der Vaart was played through on goal but blasted over the bar with only the keeper to beat, and Leoni saved one-handed from Ronaldo after a surge into the area.

At the San Siro, Milan took an early lead when Marco Borriello rounded Gabriel Heinze and shot past Marseille goalkeeper Steve Mandanda in the 10th minute.

Marseille drew level six minutes later when Lucho Gonzalez pounced on a loose ball in the box and fired home after Milan goalkeeper Dida failed to clear a cross.

A second-half goal from Nicolas Anelka gave Chelsea a 1-0 win at Porto and ensured the London club will finish top of Group D.

The French international headed in from close range in the 69th minute of
a largely uneventful encounter.

Both teams had already qualified for the knockout round.

Chelsea, the English Premier League leaders, had most of the possession in
Portugal but produced a tepid performance overall.

In the first half Keeper Petr Cech went full stretch to deny Porto’s Fernando Belluschi and in the 29th minute the Argentine midfielder, making his first start for a month, struck the goal frame with a long-range effort.

“It was an evenly balanced game. We stood toe-to-toe with them,” Porto coach Jesualdo Ferreira said.

“We just lacked a bit of luck.”

In a surprise selection, Porto left Brazilian international striker Hulk on the bench and started with Silvestre Varela on the right flank.

Atletico Madrid took a step closer to clinching a spot in the Europa League by drawing 1-1 at Apoel Nicosia.

Nenad Mirosavljevic tapped in a low cross from Nectarios Alexandrou to give Apoel a 1-0 lead in the fifth minute.

Atletico leveled in the 62nd from captain Simao Sabrosa’s first-time shot from 20 metres.

They have three points in Group D, one more than Apoel. Neither team can advance in the Champions League. 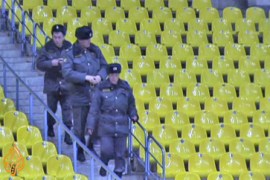 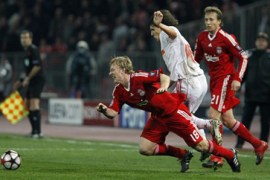