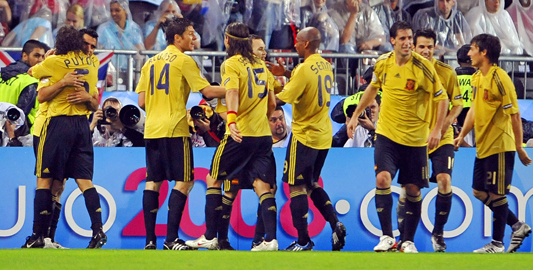 Spain outclassed Russia on a wet night in Vienna [AFP]

Spain put in a dominant display to book a place in the final of the European Championships, after a 3-0 win over Russia on Thursday.

Luis Aragones’ men eased to victory on a night of heavy rain in Vienna, after David Silva sealed the game with his only shot of the game on 82 minutes.

Midfielder Cesc Fabregas had put Silva through after breaking and threaded the ball to the Vallencia striker who put it past Igor Akinfeev, the Russian keeper.

The Russians failed to create any clinical chances until the dying minutes and were undone by Spain’s one-touch passing.

The Spaniard’s second goal came from just that style of play, which ended with a Fabregas chip releasing Daniel Guiza who flicked the ball home with thirteen minutes to go.

Fabregas had replaced David Villa on 34 minutes. The striker, who has been on top form during the tournament, scoring four goals so far, went off after seeming to hurt himself when striking a free-kick.

Aragones said after the game that Villa would now miss the final against Germany on Sunday due to the injury.

Xavi Hernandez had initially put Spain ahead five minutes after half-time. The Barcelona player ran through the defence unopposed to latch onto a cross and put the ball through Akinfeev’s legs from ten yards out.

Aragones was pleased with his side’s performance but was immediately looking ahead: “It was difficult, especially in the first half. I think it was an extraordinary second half.

“That’s what we wanted, to be in the final. But there’s an adversary called Germany, that is going to be interesting.”

Andres Iniesta, the Spanish midfielder who was voted man of the match, said after the game: “The team pushed on and I think we dominated the match. I’m very happy about being in the final.

A disappointed Guus Hinnink, the Russian coach, said: “It was their plan that they were going to make us tired so we couldn’t make a fist of it in the second half.

“However, we can be proud of reaching where we did and of coming third. We faced really strong opposition tonight and they deserved to win.”

Glen Hoddle and Terry Venables, Al Jazeera’s Euro 2008 analysts, both said the Spaniards have had an excellent tournament.

Hoddle said: “Without any shadow of a doubt they have been best team in this tournament. In the first half, they played in fits and starts, but in the second half…the way they passed the ball was phenomenal.”

Fabregas orchestrated much of Spain’s link-up play, leading Los Toros to control much of the second half.

“That extra man, giving them nice width – and there was a resemblance of Arsenal there.

“Fabregas can link the passing, and play a pass that no one else on that pitch can play.”