English Premier League leaders Manchester United became the third English team to reach the Uefa Champions League semifinals Wednesday, and the two-time champions will face FC Barcelona in the next round.

United advanced by beating Italy’s AS Roma 1-0 and 3-0 on aggregate, with Carlos Tevez scoring the only goal with a diving header in the 70th minute.

The win for United was a Champions League record 11th consecutive at home.

“If we’ve got a full squad we’ve got a chance. Somebody has got to lose,” United manager Alex Ferguson said of the semifinals.

Barcelona got its goal in the 43rd from Yaya Toure in a 1-0 win over Schalke that gave the Spanish team a 2-0 aggregate win.

Barcelona and Manchester United are the only unbeaten teams left in the Champions League.

Chelsea, the only club remaining to have never won the European Cup, and Liverpool meet in the other semifinal series for the third time in four years.

Tevez scored with a diving header off a cross from Owen Hargreaves, long after Daniele de Rossi missed a penalty for the Italian team in the 30th.

Last April, United routed Roma 7-1 and advanced to semifinals 8-3 on aggregate, but then lost to eventual champion AC Milan.

“We put in a good game and a good performance,” Roma coach Luciano Spalletti said.

“We had to take one or two risks. It was important to exploit chances when we actually created them, but didn’t capitalize on them. If we had it would have changed the face of the game.”

Barcelona, which won the Champions League two years ago but was ousted by Liverpool in the second round last season, hosts Manchester United on April 23.

The return leg six is set for April 29.

Barcelona took the lead when Bojan Krkic’s cross was deflected up and headed around before falling to Toure in the box.

Ronaldinho and Deco, two players who have missed lengthy periods to injury, were not in the lineup.

“This team deserves a lot of credit for what it’s done. It’s fought to the end to achieve this result,” Barcelona president Joan Laporta said.

“We played 90 very good minutes out of the 180 against Barcelona and the two times we let our guard down they took advantage,” Slomka said.

Chelsea reached the semifinals for the fourth time in five seasons on Tuesday with a 2-0 with a win over Fenerbahce.

Five-time champion Liverpool advanced after a 4-2 win over Arsenal.

Liverpool beat Chelsea in semifinals in 2005 and ’07, winning the title three years ago.

The Champions League final is scheduled to be played in Moscow on May 21. 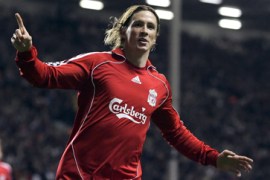 Liverpool’s European campaign continues after a dramatic victory at Anfield. 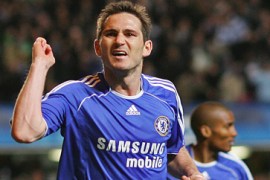 The Blues defeat Fenerbahce in London 2-0.