Tariq Hassan scored Al Wasl’s first goal in three games and gave the Emirates club a 1-0 victory over Al Kuwait for its first points in the Asian Champions League.

Al Kuwait had chances in both halves to score. Ziad Al Jaziri shot wide while unmarked in the 14th minute, and Angola midfielder Mauro Maurito wasted two opportunities, missed at the start of the second half and later sending a header against the left post.

Al Wasl began to settle as the first half progressed, but Eisa Ali and Rogerio Silva failed to convert chances.

In the second half, Al Kuwait goalkeeper Khaled Al Fadhli thwarted Alexandre Oliveira before Hassan latched onto a loose ball and converted in the 75th for the winner.

Al Hamwi converted from short range in the 69th and Jenniat added his from 35 metres in the 73rd to quiet a capacity crowd at Jassem Bin Hamad Stadium.

Teammate Mageed Holamnejhad was sent off for kicking Ali Mansour but that did not deter Ali Daei’s team.

Finally, Saudi Arabia’s Al Ahli drew 0-0 with Al Wahda of the United Arab Emirates on Wednesday, leaving both winless and damaging their chances of advancing.

The result left the pair with two points each, at the bottom of Group C, five points behind group leader Al Karama of Syria.

Both sides picked up the pace following a lackluster first half, and Al Ahli finished with 10 men when Leandro Silva was ejected with four minutes remaining.

Al Wahda nearly capitalised, but Ismail Matar’s shot from the edge of the area was denied by goalkeeper Yasser Al Mosailem.

Three games remain in the first stage and only the group winners advance. 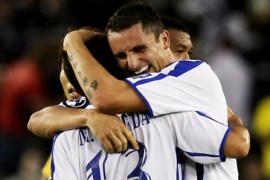 Good night for Japan in ACL

Kashima Antlers and Gamba Osaka extend their leads in the Asian Champions League.