Opening batsman Lou Vincent has become the latest New Zealand player to join the rebel Indian Cricket League, angering national officials by turning his back on an existing national contract.

The 29-year-old is the 10th New Zealander to take up a contract in the competition, joining fast bowler Shane Bond and a group of mostly retired former internationals.

“It (Vincent’s deal) was done without seeking a release. He made no effort to go through the proper channels.

“We are very disappointed. We invested a lot in Lou over recent months. Lou obviously doesn’t want to play for New Zealand any more. He’s off for financial reasons only.”

Vaughan was angry Vincent started negotiations with the ICL before his annual contract with New Zealand Cricket ended on May 31.

“We stand by these contracts regardless of performance or injury and we expect players to do the same.”

Vincent quit cricket in December after returning from New Zealand’s tours to South Africa and Australia.

He later revealed he was suffering from clinical depression and became a focus for campaigners who claim international athletes face unreasonable pressures.

The Auckland opening batsman made an outstanding start to his test career, scoring a century and half century on debut against Australia but subsequently failed to live up to that promise.

He joins Bond, Chris Cairns, Chris Harris, Nathan Astle, Craig McMillan and Hamish Marshall in the second edition of the ICL which starts on March 12.

The creation of the ICL prompted Indian authorities to set up the rival Indian Premier League competition, which is sanctioned by national boards. 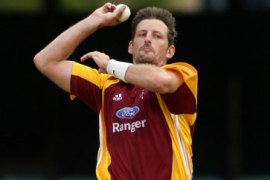