France’s 21-year-old flyhalf Francois Trinh-Duc claims he is not impressed by the challenge of facing Jonny Wilkinson on Saturday when France host England in the Six Nations.

“True, Wilkinson is one of the best flyhalves in the world. Technically, he can do everything,” the Montpellier player said after coach Marc Lievremont named him in his starting line-up on Tuesday.

“I have a lot of respect for him but I’m not going to watch him play. I’m going to concentrate on our team’s game and on my own game and I shall do my best to leave the pitch without a single regret.”

Of Vietnamese origin through his paternal grandfather, Trinh-Duc handled a rugby ball for the first time at the age of four with Pic Saint-Loup, the rugby school of a small village in a wine producing area north of Montpellier.

The youngster moved to Montpellier at 16 and played representative rugby at under-19 and under-21 level.

A year at the national academy, based in Marcoussis which also hosts the training camp of the French team, got his career moving.

At the end of last season, his club relied on him to escape relegation.

He is now a regular at Montpellier and has led the club to fifth place in the 14-team first division.

Before Lievremont handed him the mantle of France’s flyhalf he had played less than 20 games in the Top 14 of the French championship.

His experience at international level amounts to an hour against Scotland and 10 minutes against Ireland.

The young flyhalf admits that Jean-Baptiste Elissalde helped him a lot when he won his first cap at Murrayfield on February 3.

France’s experienced scrumhalf has, however, been ruled out of the England game and Trinh-Duc’s partner this time will be 19-year-old Morgan Parra who only played 21 minutes altogether against the Scots and Irish.

“Some people will say it’s a gamble to field me and Parra but it’s not worrying me because the coaches told us they had confidence in us,” he said.

“Morgan has his abilities, his talent. We are going to help one another. We’ll lead this France team together. We’ll try to bring enthusiasm, a carefree attitude. We’ll try to enjoy ourselves and play the best possible game”.

Meanwhile, England named scrumhalf Richard Wigglesworth in its team for the first time as one of three changes for the match.

Coach Brian Ashton dropped veteran No. 9 Andy Gomarsall from the squad after a disappointingly narrow 23-19 win at Italy two weeks ago in his only change to the backs.

Ashton made just two changes in the front eight despite poor performances by the pack in England’s two matches so far, when the team led strongly at halftime before fading.

Andrew Sheridan replaces Tim Payne at loosehead prop after recovering from an abscess near his Achilles tendon, and captain Phil Vickery also returns to the front row after missing the match in Rome because of a stomach complaint.

England has just two points from two games and needs to upset tournament favourite France, which it did in the semifinals of last year’s World Cup, to stand a realistic chance of winning the Six Nations for the first time since 2003.

But Ashton has resisted the temptation to make changes, such as drafting Danny Cipriani in to replace flyhalf Jonny Wilkinson or fullback Iain Balshaw.

The 24-year-old Wigglesworth was among the replacements against Italy and the opening 26-19 loss to Wales after an impressive season for Sale Sharks. 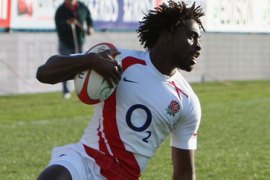 England don’t have it all their own way in Rome.