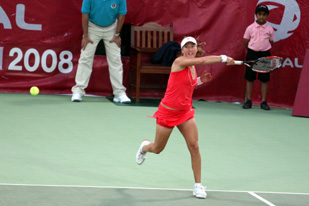 Shahar Peer said she got a “very warm
welcome” in Doha

Shahar Peer has become the first Israeli tennis player to compete in the Gulf region.

Setting aside Arab-Israeli differences, Peer made a successful debut at the WTA Qatar Open on Monday.

“Everyone was very supportive” when she decided to go to Doha, Peer said.

“When I came here I was a little excited because I didn’t know what to expect, just like every new tournament and every new place you go,” she said after the match.

“I find the people are really nice here. I got a very warm welcome.”

Peer said when she goes on the court “you don’t think about politics, you just want to go and play tennis”.

“If me playing in this tournament can help anything in the world, anything for peace, I’ll be really happy. We try to separate sport and politics as much as possible,” she said.

“I think by me being here everybody can understand that we are also human and everybody’s the same around the world. It doesn’t matter if you’re Jewish or Muslim or Christian.”

Peer, a quarter-finalist at both the Australian and US opens in 2007, defeated Slovakia‘s Andreja Klepac 6-3, 6-4 in the first round on Monday.

Peer, who turned pro in 2004, said she had always wanted to play in the Doha event which has been running since 2001 but had been absent for various reasons.

She said she was glad to finally make the journey to the Khalifa International Tennis and Squash Complex, which is just 1,800km from her home town of Maccabim-Re’ut in central Israel.

“I was three years in the army, and I couldn’t come, and before then my ranking wasn’t good enough,” Peer said of her delayed debut in Doha.

“But I really got a warm welcome from the tournament. I’m really happy being here. I have already been to the souk [market], and to dinner at a Moroccan restaurant.”

Peer’s visit is almost certain to raise Qatar‘s profile in a bid to host the 2016 Olympic Games, with its capital competing with the likes of Chicago, Tokyo, and Rio de Janeiro.

The Israeli tennis player was positive about the possibility of the Games coming to the Middle East for the first time, and backed Doha as an emerging sporting capital, saying she would be happy if her presence “helps them”.

“I think they can build a lot before the Olympics,” she said. “This is a very rich country as everyone knows.”

“They have held so many events and have taken the [season ending WTA] Championships for the next three years which is a very nice things, and also have this tournament along with the men’s tournament.”

Peer will play Virginie Razzano of France in the Qatar Open second round as she endeavours to make her first foray into the Gulf as memorable on the court as it already has been off it.

But she will not be playing in next week’s Dubai Tennis Championship as she has already committed to the Memphis indoor event in Tennessee where she finished runner-up to Venus Williams last year.