Barcelona have left out Ronaldinho and Deco from their squad to visit holders Sevilla in their last 16 first leg of the King’s Cup.

The Brazil forward misses his third consecutive game with tendinitis in his left knee, while Portugal midfielder Deco has a muscle problem in his left leg.

In other news from the Catalan club Gianluca Zambrotta will remain until the end of the season despite media reports linking the Italy full back with AC Milan, Chelsea and Tottenham, his agent said.

“I have absolutely no news on the interest of other clubs. Gianluca will remain at Barcelona at least until June and then we will see,” Marcello Bonetto was quoted as saying on Gazzetta dello Sport’s website.

In Italy, Juventus striker David Trezeguet will be a witness on January 29 at the trial of several men connected with the alleged illegal practices of sports management agency GEA world.

Former Juventus general manager Luciano Moggi, at the centre of Italy’s match-fixing scandal, is accused of securing “unfair competition through threats or violence” along with his son Alessandro, who ran GEA, and Marcello Lippi’s son Davide among others.

Several top players and coaches, including England boss Fabio Capello, are expected to give evidence at the trial which is examining whether the accused manipulated the transfer market by controlling players’ movements.

“There is still nothing definite,” he added.

Reggina’s Nicolo Cherubin along with Davide Possanzini and Daniele Mannini of Serie B Brescia should serve one-month bans for missing drugs tests, the Italian Olympic Committee’s anti-doping prosecutor said in a statement as he deferred a decision to the soccer federation. 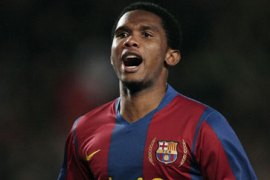 Cameroon call on Barcelona to allow their star striker to travel immediately.