Brazil failed to produce the performance that has come to be almost expected of them, but they did enough in their match with Ecuador to make the Copa America quarterfinals via a disputed Robinho penalty.

They will be joined there by Chile, who ground out a goalless draw with already qualified Group B winners Mexico earlier on Wednesday.

Brazil failed to find their rythym in the first half in Puerto la Cruz and Ecuador threatened several times.

However 11 minutes after the break Giovanni Espinoza was adjudged to have hauled down Robinho and a penalty was awarded despite Ecuadorean suggestions that the dimunitive Brazilian striker might have made a meal of the challenge.

The Real Madrid striker duly tucked away the spot kick notching up his fourth goal of the competition so far.

The young Brazilian team, missing Ronaldinho and Kaka, then held Ecuador off to finish second in the group despite only showing faint glimpses of the traditional flowing football the five-time World Cup winners are famed for.

They will now face Chile in the quarterfinals on Saturday in a rematch of Sunday’s game in which Robinho notched a hatrick to register a 3-0 win.

Ecuador went home without a win despite having fielded much of the same squad that helped it qualify for the past two World Cups, including reaching the second round in Germany last year.

Chile booked their spot in the last eight by drawing 0-0 with Mexico earlier on Wednesday.

The Chileans were more dangerous early on but proved ineffective in the area and Humberto Suazo’s driving shot at the 21st minute flew just over the bar.

The game resorted to a series of counterattacks in the second half.

Mexico will play Sunday in Maturin against the loser of Thursday’s match between Paraguay and Argentina.

Wednesday’s Group B result means the identity of all eight quarterfinalists is now known meaning Colombia and the USA will be heading home after Thursday’s Group C games, whatever the results. 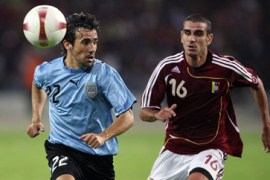 Uruguay and Peru in Copa quarters