The manner in which Australia dispatched India in the first test does not augur well for a competitive series.

Ricky Ponting’s side strangled arguably the strongest batting line up in test cricket, bowling them out for less than 200 in both innings to secure a 337-run victory late on the fourth day.

The aggressive Australian batsmen also grafted to produce a succession of small but effective partnerships on the slow pitch against an Indian attack which bowled reasonably well.

India captain Anil Kumble is convinced, however, that his side were in the game for long periods.

“I don’t think we were intimidated,” Kumble said.

“Yes, Australia batted and bowled well, but there was not a single time I felt like we were intimidated.

“If the bowlers bowl the way they did and ensure that they get 10 wickets early on and put pressure on the Aussies, like I thought we did throughout, then we just need our batsmen to score runs.”

India’s batsmen struggled on the Melbourne Cricket Ground pitch though Kumble said more practice, rain ruined their preparations in Melbourne, and a better wicket at Sydney would ensure his batsmen produced the innings they were capable of.

“The wicket was slow and it was not easy to play your shots,” the leg-spinner said.

“I’m sure Sydney will be a better wicket in terms of stroke making and we have stroke makers and I’m sure the ball will come on to the bat better.”

Australia captain Ricky Ponting, however, felt his side were in control of the game from the second day when his bowlers strangled India’s batsmen.

“It was a 50-50 game at stumps day one, but the way we bowled and our intensity in the field in the start of day two probably was where the game really changed and swung into our favour,” said Ponting.

“We were pretty much in command and control from there.”

Ponting’s side won their 15th successive test on Saturday and will equal the world record of 16 with victory in Sydney.

“It’s getting closer by the game, but we didn’t mention it at all going into this game and that’s the way I prefer it as well,” Ponting said.

“I think if we just go about our normal business, getting well prepared for games and playing good cricket then those sort of things will look after themselves.

“There’s a lot of hard work and a lot great play to go into winning any test match and we played well here and, hopefully, we can go to Sydney and play even better and if we do then that record will be even closer once again.” 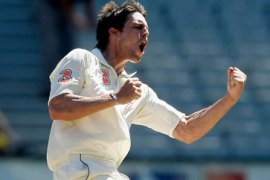 Australia win the first test by 337 runs with more than a day to spare.