Chasing 389 to win the first test, South Africa were dismissed for 260 after tea on the fourth day to hand West Indies victory by 128 runs.

It was West Indies’s first away test win against opposition other than Zimbabwe or Bangladesh since they beat England by an innings and 93 runs in Birmingham in June, 2000.

West Indies resumed their second innings on 146-8 but were soon bowled out for 175, left-arm spinner Paul Harris taking both wickets to finish with 4-35.

South Africa then slumped to 20-3 with fast bowler Daren Powell starting the slide when he trapped Herschelle Gibbs in front without scoring.

Edwards first struck when he had Hashim Amla caught behind by wicketkeeper Denesh Ramdin for eight.

In Edwards’s next over, Graeme Smith spliced a short delivery upward for short leg fielder Daren Ganga to dive across the pitch and complete the catch to dismiss the South African captain for 11.

Ashwell Prince, who scored 10, was dismissed with the fourth ball after lunch, which he edged to Chris Gayle at first slip to earn Taylor his first wicket.

Jacques Kallis and AB de Villiers took South Africa to tea with disciplined batting, but with their partnership worth 112 umpire Russell Tiffin adjudged that Kallis was caught behind by Ramdin by a ball from Edwards that hit the batsman on the shoulder.

Kallis faced 126 balls and hit nine fours for his 85, while De Villiers scored his 60 off 131 balls before heaving a delivery from Taylor down the throat of Marlon Samuels at long on.

A spirited stand of 67 for the ninth wicket between Andre Nel (34) and Dale Steyn (33 not out) provided the South Africans with temporary respite.

The result ended South Africa’s run of five tests without defeat, stretching back to last January when Pakistan beat them by five wickets in Port Elizabeth.

The second of the three tests starts in Cape Town on January 2. 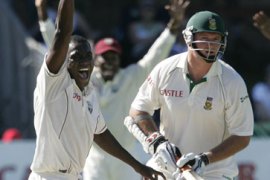 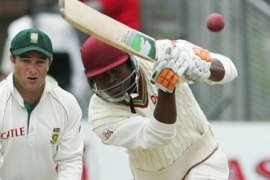 Marlon Samuels scores 94 as the first Test is finely balanced.