Bode Miller has had a tough time since breaking away from the U.S. Ski Team.

He finally broke though for his first victory of the season on one of the toughest downhill courses on the World Cup circuit.

The coaches and staff members that Miller hired for himself this season were starting to get nervous that their gamble might not pay off.

“I think they were getting ready to kill me if I didn’t win a race soon,” Miller said.

“They’ve been taking it much harder than I do. I obviously want to win and I take it tough when I make mistakes, but for them they have no control over it all, and they see the way I’ve been training and how much work we’ve put into it.”

Miller finished in the top eight in six of his first 15 races this season.

This time, while the other favorites had trouble, Miller put down a near-perfect run and covered the 3.270-kilometer (2.03-mile) Stelvio course in 2 minutes, 0.57 seconds.

Andreas Buder of Austria was second, 0.45 seconds behind, and Jan Hudec of Canada was third, 0.54 back.

After clashing with the U.S. federation over team rules, Miller decided to train and race on his own this season. Complying with International Ski Federation rules, he still wears a U.S. uniform when he skis, but puts on his own jacket with his personal sponsors as soon as he takes his skis off.

The victory was the 26th of Miller’s career, putting him within one win of matching Phil Mahre’s U.S.-record of 27 victories.

The three members of the U.S. team at the race, Marco Sullivan, Steven Nyman and Scott Macartney, each went over and congratulated Miller.

“We’re all still teammates in a way,” Miller said.

“My points still go for the U.S. team and we’ve all been friends and they’ve had a huge contribution to my career and I think they’re still invested in my success in a way. It really didn’t feel much different.”

Miller becomes the fourth American to post a podium finish in the four downhills this season after Sullivan, Nyman and Macartney, who each had problems Saturday.

Sullivan finished 12th but could have been in the top 10 if not for a major error midway through his run that cost him a half-second.

Nyman skied far off course and finished last. Macartney missed a gate and did not finish.

Miller was a later starter and his three former teammates watched his run attentively.

“It was pretty impressive, especially in that roundhouse turn with the fall away, that thing is icy, gnarly and bumpy, and he was clean and charged right through that,” Nyman said

“I like watching him do what he does when he does it. It’s impressive when he pulls it off. It’s so on the edge, it’s not going to work every time,” Nyman added.

Nyman respects Miller’s decision to race on his own and was pleased for his victory.

Michael Walchhofer, who won back-to-back downhills here last season, got thrown off course midway through his run and nearly crashed into the fence.

He finished in a tie for 19th.

Walchhofer still holds a 230-204 lead over Cuche in the downhill standings.

Miller moved up to third with 183 points.

Marco Buechel, another contender, also lost control and did not finish.

Benjamin Raich finished 28th to retain a 524-503 lead over Cuche in the overall standings.

Miller jumped from seventh to fourth overall, with 406 points.

The Stelvio trails only Wengen, Switzerland, as the longest course on the World Cup circuit.

Unlike Wengen, though, the Stelvio bumps and jerks skiers from start to finish.

The undersides of athlete’s skis remain completely attached to the snow for only 12 seconds of the average 120-second run.

The rest of the time, skiers are on their edges changing direction and executing turns and jumps.

“It definitely separates the field. I don’t think there’s anyone who runs this course that would call it anything but extremely challenging.”

Miller’s last victory came in Wengen nearly a year ago.

“I tend to do better on the really tough courses,” he said. “I focus more.”

Miller won both the downhill and super-G here at the 2005 World Championships.

Hudec won the silver medal in downhill at last season’s worlds in Are, Sweden, and then won the opening downhill this season in Lake Louise, Alberta.

“This is really special, because Bormio is not a glider’s course. The last 45 seconds you have to have it here,” Hudec said, pointing to his heart.

Bormio is also the site of this season’s World Cup finals in March, meaning Miller will have at least one more opportunity to win here. There is talk of moving next year’s World Cup race to a different resort in Italy.

“I think it would be a tragedy to lose this race,” Miller said. “It’s one of the classics, one of the most challenging.” 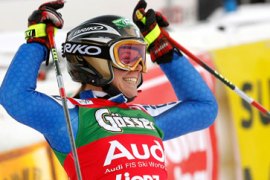 Italian skier continues her perfect record in the giant slalom.