Flamengo vice president Kleber Leite said AC Milan directors have authorised the Brazilian club to approach Ronaldo, who is in Brazil on vacation and for treatment of an injury.

“This is not a marketing maneuver,” Leite said in Wednesday’s editions of the O Globo newspaper.

“It’s a negotiation I’ve been conducting for the past three days, without sensationalism. I’ve talked twice with (AC Milan official) Leonardo and Ronaldo.”

The Italian club denied on its Web site that a transfer has been discussed.

“A.C. Milan denies that it started a negotiation with Flamengo for the transfer of Ronaldo,” it said.

“It denies also having authorized the Brazilian team for an eventual deal with the soccer player.”

Leite said both parts appeared interested in a possible deal, but stressed that nothing had been agreed yet.

“These talks were conceptual only,” he said.

“We haven’t talked about salaries or transfer fees. We just started to negotiate.”

Leite admitted that Flamengo would not be able to match Ronaldo’s salary in Europe, and said both parts would need “to adjust the difference between both markets.”

Ronaldo, 31, has previously said he wants to play for Flamengo sometime in his career.

His contract with Milan ends in June 2008, but injuries have limited his playing time since he signed in January.

Leonardo, a former Flamengo player who now works for Milan, confirmed to local media that he talked to Leite, but said he didn’t expect a deal anytime soon.

Ronaldo, who twice won FIFA’s player of the year award, led Brazil to the 2002 World Cup title in South Korea and Japan.

He also was a member of the Brazil squad that won the 1994 title in the United States.

“It would be an excellent signing,” Flamengo coach Joel Santana told Radio Brasil.

“A player of this quality would be a great gift for our fans for the 2008 season.”

The club earlier this month acquired Paraguay midfielder Diego Gavilan, a former Newcastle and Udinese player who was playing for Brazil’s Gremio.

Next season, Flamengo will also count on former Manchester United midfielder Kleberson, who played alongside Ronaldo in the 2002 World Cup. 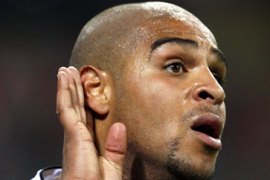 The Brazilian striker returns home on a six month loan.