Clark (4-28) took two wickets from three balls either side of the tea break and Lee (4-46) cleaned up the tail end to close out an outstanding innings for the Australian bowlers on a deteriorating Melbourne Cricket Ground wicket.

After having Yuvraj Singh caught behind for a duck on the last ball before tea, Clark completed his over after the break by trapping Mahendra Dhoni lbw without conceding a run.

Matthew Hayden was unbeaten on 22 and Phil Jaques had 10 at stumps to give Australia a second-innings total of 32 and a lead of 179 after ending the first innings on 343 earlier Thursday.

“We definitely should have played better, but it’s all part and parcel,” said star India batsman Sachin Tendulkar.

“The match is not over yet and we’ll continue to fight.”

Clark took the vital wicket of Tendulkar for 62 shortly before tea to break up a promising 65-run, fourth-wicket partnership with Saurav Ganguly.

“If we had converted that into a big partnership, it could have really made a huge difference to the later batting order,” Tendulkar said.

“That was probably an important wicket.”

After Australia’s pace attack claimed three top-order wickets for just 55 runs, Tendulkar settled in to anchor the India innings, confidently placing the ball into gaps and timing eight boundaries as well as a big six over long-on off spinner Brad Hogg.

Lee made the first breakthrough of the day with the new ball when he had Indian opener Wasim Jaffer caught behind for 4 in the ninth over.

Clark saw off slow-scoring opener Rahul Dravid with the last ball before lunch to leave India struggling at 31-2. Dravid’s runs came from 66 balls.

Lee claimed his second wicket with a scorching short delivery that flew off V.V.S. Laxman’s wrist guard to a diving Ricky Ponting in the slips.

“We were just trying to make sure we kept nice and patient and just give them nothing,” Lee said.

Australia captain Ricky Ponting’s patience with Hogg (2-82) paid off in the 61st over when he clean bowled Ganguly for 43.

Ganguly was looking comfortable at the crease and struck one four and a six from his 79 balls before being wrong footed by Hogg, leaving India at 166-7 and its fate in the hands of captain Anil Kumble and the tailenders.

Hogg had Harbhajan Singh caught by Michael Clarke for 2 for his second dismissal.

The left-arm bowler conceded 71 runs in 15 expensive overs before taking his first wicket.

Kumble ended a dogged knock of 27 runs from 76 balls, including four boundaries, when he was caught behind by a diving Adam Gilchrist off a Lee ball.

The dismissal was Lee’s 250th test wicket and brought up his fifth consecutive four-wicket haul.

Lee and Gilchrist combined again to see off Zaheer Khan for 11.

“When Stuey Clark can knock over Sachin Tendulkar and Dhoni in the space of a couple of balls, it just makes our job a lot easier.”

Earlier, fast bowler Khan dismissed Clark in the fourth over of the day to end Australia’s first innings.

Clark failed to add to his overnight score of 21 when he attempted a big hit off Khan only to be caught by Harbhajan Singh near the boundary rope at deep mid-wicket.

Mitchell Johnson ended the innings unbeaten on 15, adding five runs to his first-day score, including a boundary. 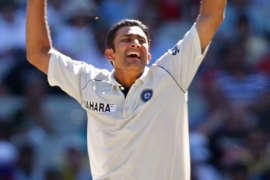