India captain Kumble (5-84) made it clear his team would not be intimidated by the big-name Australians, claiming the wickets of Phil Jaques, Mike Hussey, Andrew Symonds, Adam Gilchrist and Brett Lee to leave the home side on 337-9 at stumps.

Stuart Clark scored 21 runs from 17 balls as he and fellow tailender Mitchell Johnson weathered the final overs to see out the day on a deteriorating Melbourne Cricket Ground wicket.

After combining with Jaques for a steady first-wicket stand of 135 runs, Hayden brought up his century when he cracked an R. P. Singh ball for four runs in the 43rd over.

The century was his 19th scored in Australia, surpassing Donald Bradman and Ricky Ponting with 18 each.

Hayden was dismissed in the 63rd over when he spooned a Zaheer Khan (3-93) delivery to Saurav Ganguly at mid-on for a simple catch, leaving Australia at 241-5.

The Australian opener said he rated his century as one of his best given that the condition of the wicket made batting difficult.

“I think it’s definitely going to be a wicket that’s going to be very, very hard to score on over the next few days,” he said.

Jaques overcame a shaky start to smash a half-century before being dismissed by Kumble for 66 runs, sparking a mini-collapse.

After Australia ended the first session at 111-0, Kumble made his breakthrough in the 34th over when he had Jaques stumped by wicketkeeper Mahendra Dhoni.

India maintained its momentum, dismissing Ponting and Hussey in the space of just four deliveries to dent Australia’s confidence.

Australia captain Ponting managed just four runs before he was bowled by paceman Khan in the 39th over, ushering Hussey to the crease.

Hussey faced three balls and scored two runs when he became Kumble’s second dismissal, trapped lbw in the 40th over with the score at 165-3.

“It was important that we came back well into the test match,” Kumble said.

“One wicket of Jaques, and Zaheer bowled a beauty to Ricky Ponting, and things started to happen.”

Hayden and Michael Clarke (20) shared a 60-run partnership for the fourth wicket and looked to be settling in before Clarke was caught by V.V.S. Laxman at second slip off an R. P. Singh ball in the fourth over after tea.

Symonds compiled a quickfire 35 off 42 balls, including five boundaries, before he became Kumble’s third victim when he mistimed a pull shot and was caught by substitute fielder Dinesh Karthik at mid-on with the total at 281-6.

Gilchrist followed shortly after, caught by Sachin Tendulkar off Kumble, and Lee was sent packing for a duck off Kumble’s 19th over of the day.

Brad Hogg (17) was caught by Rahul Dravid off Khan in the final overs.

“I think the intensity was good after lunch and we kept coming hard at Australia and I’m really happy with the way all the bowlers bowled,” Kumble said.

“To get nine wickets on the first day after losing the toss I think was a brilliant effort.”

Australia’s opening pair got off to a slow start under some intense pressure from India’s pace attack after Ponting won the toss and elected to bat first.

Hayden finally found his first run with a single in the fifth over.

Police Superintendent Stephen Leane said 110 persons were ejected Wednesday from the ground, most of them for throwing objects in the air.

Among the crowd of 65,000, there were also 12 arrests, including those for public drunkenness, streaking and assaulting a police officer.

“We’ve got a small element who want to come to the cricket and misbehave,” Leane said. 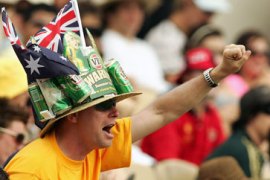 CA gets tough on racism 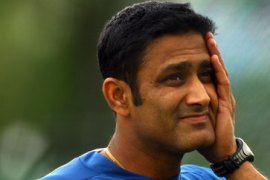 India’s cricketers are angry at boosting the Australian government’s coffers.