Cristiano Ronaldo’s late penalty gave Manchester United a 2-1 victory over Everton as the Red Devils again moved within a point of Arsenal in the English Premier League.

“With the next games, there is not too much time to rest, so it was important to win to stay near the top,” Ronaldo said in a reference to the busy Premier League spell of four games in 11 days.

Joe Cole fired third-place Chelsea to a 1-0 victory at Blackburn and Newcastle’s Mark Viduka scored a second equalizer three minutes from the end to make sure the Magpies avoided a major upset, drawing 2-2 at home with last-place Derby.

Ronaldo now leads the Premier League scoring list with 11 goals this season, and 16 in all competitions. While the decider came from the penalty spot, the first was a standout strike.

Receiving a pass from Carlos Tevez 25 meters from goal, Ronaldo cut inside Lee Carsley and, while the ball took a slight deflection off the Everton midfielder’s toe, it flew so fast past Howard that the goalkeeper didn’t even dive for it.

The Toffees, who had gone 13 games unbeaten ahead of this match, drew level in the 27th when Cahill outjumped United defender Patrice Evra to meet Steven Pienaar’s cross from the left.

With four yellow cards in the first 14 minutes, it was a typically fiery meeting of the two northwest England neighbors.

United midfielder Anderson was shown a yellow card for indicating to referee Howard Webb that Everton midfielder Phil Neville, a former United player, should have been cautioned for a foul on Ronaldo.

Making his first appearance against United after his move to Everton during last season, Howard blocked a deflected shot from Anderson with his chest and then dived low to his right to make a low save from Tevez as the home side put together a spell of pressure.

Wayne Rooney clipped the crossbar with a shot from just outside the area and forced Howard to make another blocking save with five minutes to go.

The winner came after a needless foul by Pienaar on Ryan Giggs and Ronaldo guided his spot kick into the net with Howard guessing the wrong way with his dive.

Everton manager David Moyes faulted Pienaar for the foul but praised the overall performance of the South Africa midfielder who arrived on loan from Borussia Dortmund.

“I thought it was a penalty. It was just a moment of madness for Steven,” Moyes said.

“He’s been excellent today and excellent since he’s come. It was one of those things, the players worked really hard to get something out of the game.”

The Blues lost goalkeeper Petr Cech with a hip injury midway through the second half, however, which will worry coach Avram Grant with three more games to follow by January 1.

Giles Barnes gave Derby a sixth-minute lead at Newcastle but Viduka equalised in the 27th.

Kenny Miller then threatened an upset by restoring Derby’s lead in the 52nd minute but Viduka made it 2-2 with a low shot from the edge of the area.

Derby now has seven points but remains six behind next-to-last Wigan, which drew 1-1 with Fulham on Saturday. 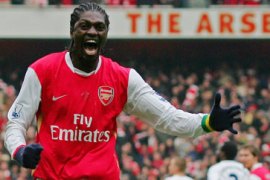