Manchester United defender Jonny Evans has been released on police bail after being arrested in connection with an alleged rape of a woman at the club’s Christmas party.

The 19-year-old Northern Ireland international, who turned himself into police on Tuesday night, was ordered to present himself to police on Feburary 23.

United players booked the entire hotel for a party on Monday night.

Manchester United has declined to comment. Evans was among the United players photographed leaving the club’s Christmas lunch Monday.

Evans is not a regular in Alex Ferguson’s first team, but was handed a Champions League start last week at AS Roma with progression to the next round already secured. 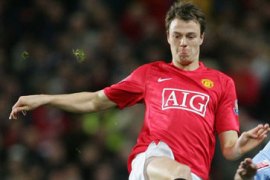 The 19 year old defender is arrested and questioned.