England was bowled out for a humiliating 81, its lowest ever test score against Sri Lanka, in its first innings of the third test, ending any realistic chance of rescuing the series at the end of day three.

The tourists capitulated under the pressure of Sri Lanka’s first innings score of 499-8 declared, and the need to win the final test to level the series.

Forced to follow on, England faced a single over from Muttiah Muralitharan under fading light and survived to be 2-0 in its second innings at stumps.

The previous lowest total by England in a test innings against Sri Lanka was 148 in Colombo four years ago.

Thursday’s score equalled the lowest innings in tests between the two nations, with Sri Lanka also scoring 81 in a test in 2001.

No.3 batsman Ian Bell (1) then had a bad mix-up with Alastair Cook and was run out to a brilliant direct hit by Tillakaratne Dilshan, fielding at cover.

Vaas struck again with the score on 22 when he had Cook (13) caught behind by wicketkeeper Prasanna Jayawardene, though replays suggested the ball missed the edge.

Kevin Pietersen (1) continued the procession to the pavilion when he gloved a bouncer from Lasith Malinga to the wicketkeeper.

Matthew Prior (4) then misread a crafty dipping delivery from Vaas and was bowled, leaving his side at 33-6.

Paul Collingwood and Ryan Sidebottom added 37 runs for the seventh wicket and looked capable of at least dragging England into triple figures, if not avoiding the follow-on.

But it proved to be a false dawn as the tail collapsed.

He later had tailender Matthew Hoggard caught by Mahela Jayawardene at slip to finish with 2-17 in eight overs.

Captain Mahela Jayawardene moved to an unbeaten 213, his fourth double-century, and combined for a record 183-run stand for the seventh wicket with Vaas.

The partnership between the pair was the highest for the seventh wicket in tests between Sri Lanka and England.

Sri Lanka won the first of the three-test series in Kandy and the second ended in a draw in Colombo. 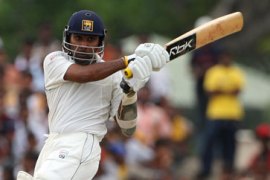 Sri Lankan captain has tonnes of fun as his batsmen frustrate England. 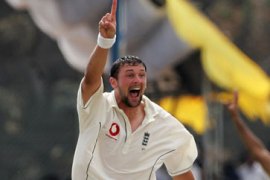