Brazil midfielder Kaka rounded out his award filled year by collecting the Fifa’s World Player of the Year.

The 25-year-old playmaker received 1,047 points in a vote by national team captains and managers, more than twice as many as Argentine midfielder Lionel Messi of FC Barcelona with 504.

For Kaka, it is the third accolade this year.

“Tonight is a really special night for me,” Kaka said after being handed the trophy.

He is the fifth Brazilian to win the title joining Ronaldo; who has won the trophy three times, Ronaldinho (2), Romario (1), and Rivaldo (1).

Kaka said before the award ceremony at the Zurich Opera House that he owed his success this year to his club.

After winning the award, the deeply religious Brazilian also invoked a higher power.

“When I was young, I dreamed of becoming a professional player for Sao Paulo and playing one game for the national team,” Kaka said.

“But the Bible says that God is more than we can think, and he will give more, and this is what happened in my life.”

Kaka led Milan to a 2-1 victory over Liverpool in the European Champions League final in May.

On Sunday, he scored one goal and set up two for Filippo Inzaghi as Milan won its record fourth world club title by beating Argentina’s Boca Juniors 4-2.

Messi, who tore a thigh muscle over the weekend when Barcelona beat Valencia 3-0, memorably showed his skills when he scored against Getafe in April after picking up the ball in his own half and driving past four opponents before sliding the ball past the goalkeeper.

The feat drew comparisons with Diego Maradona’s second goal in the 1986 World Cup quarterfinal match against England, chosen in 2002 as the best the greatest goal in World Cup history.

Cristiano Ronaldo would have been the first winner from an English club.

The Manchester United player has nine goals and is tied atop the Premier League with Arsenal’s Emmanuel Adebayor and Everton’s Ayegbeni Yakubu.

In the women’s competition, Marta of Brazil won her second straight award, earning 988 points to beat Birgit Prinz of Germany with 507 and fellow Brazilian Cristiane with 150.

Marta was the leading scorer of the 2007 Women’s World Cup in China with seven goals.

The 21-year-old led Brazil to the final, where it was beaten 2-0 by Germany.

“I’m very happy to be here once more, and you can be sure I am going to give my best to be here on other occasions,” Marta said.

Others awardedcon the night included FC Barcelona, which won the Fair Play Award for donating space on its jersey to advertise the U.N. children’s fund UNICEF; and Pele, who was granted the Fifa President’s Award. 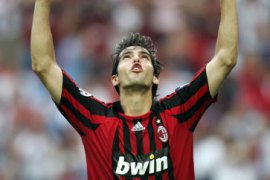 The AC Milan midfielder is expected to pick up yet another award. 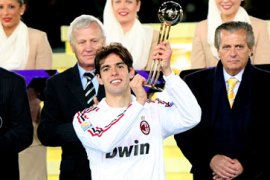