Favre threw for 227 yards and two touchdowns in the Green Bay Packers’ 33-14 victory over the St. Louis Rams.

He was 19-for-30, throwing his 25th and 26th touchdown passes, with two interceptions after entering the day needing 184 yards to pass the Miami Dolphins legend.

“I say every time this happens that I’m honoured,” Favre said.

“I would much rather win. I’m tickled to death that I’ve had a chance to break these records and be a part of all these wonderful things.”

The 38-year-old Favre, a three-time NFL MVP, pulled 1 yard behind Marino with a 44-yard touchdown pass to Greg Jennings that put the Packers ahead 27-14 in the third quarter.

When he set the record on a 7-yard toss to Donald Driver on the Packers’ first drive of the fourth quarter, he had all the fans cheering for him from every corner of sold-out Edward Jones Dome.

The game was halted for a few minutes, public address announcer Jim Holder acknowledged the record.

Favre was reminded on the sideline that the next completion would mean the record, “which is good and bad.”

“I expected this to happen, but I wanted to win the ballgame and be focused on that and not be distracted or have the team be distracted by something I did,” Favre said.

“Actually, when they stopped the game my first reaction was ‘What happened?’ A penalty or something like that.”

Favre, who has 61,405 yards, also was in his 17th season while enjoying a year comparable to his peak production, although he made sure Marino got his just due.

“I’ve said this all along: I’ve never considered myself to be in the same league as Dan Marino,” Favre said.

“What a great passer, maybe the greatest passer ever.

“The way he did it is maybe the way you’d coach another guy to do it.”

He had 440 touchdown passes after breaking another mark that belonged to Marino with his 421st against the Minnesota Vikings on September 30.

He topped John Elway’s career record for victories by a starting quarterback with his 149th against the New York Giants on September 16.

Favre entered Sunday’s game on pace to surpass his personal best of 4,413 yards in 1995 and challenge Lynn Dickey’s franchise record of 4,458 yards set in 1983.

“My arm is in good shape,” Favre said.

“It’s probably not as good as it was 12 years ago, eight years ago. But I still think I fling it pretty good.”

He needs four touchdown passes in the last two games to add to his own NFL record by throwing 30 or more in nine seasons.

The match was Favre’s 251st consecutive regular-season start, or 271st counting the playoffs, both records for a quarterback. 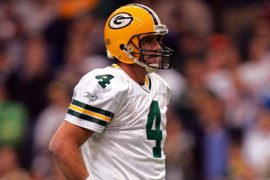