English Premier League title contenders Chelsea have been dealt a serious blow with the news that centre back John Terry will be out of action for up to six weeks after a scan showed he had broken three bones in his right foot.

The Chelsea and England captain sustained the injury after being caught by Emmanuel Eboue in the first half of Sunday’s 1-0 defeat by Arsenal at the Emirates Stadium.

“However, as is usual with mid-foot injuries, the fractures were revealed following scans, which were performed this afternoon.”

The defender has only recently recovered from a knee injury that kept him out for seven games and also forced him to miss the end of England’s unsuccessful Euro 2008 qualifying campaign.

Chelsea striker Salomon Kalou said Eboue, an Ivorian compatriot, had apologised to Terry for the challenge.

Chelsea are already without leading scorer Didier Drogba following knee surgery and will miss him for several more weeks in the New Year when he goes to the African Nations Cup. 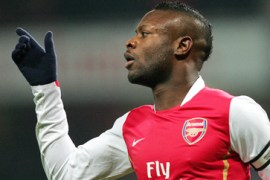 Top two teams both win 1-0 as Liverpool and Chelsea’s title challenges are dented.