The traditional rugby rivalry between Australia and New Zealand took a dramatic turn as Robbie Deans became the first New Zealander to become the head coach of the Wallabies.

Deans, a former All Black, signed a contract until the end of the 2011 season, marking the first time a non-Australian will been in charge of the Wallabies in more than a century of test-match rugby.

After failing in his bid to become All Blacks coach, as New Zealand reappointed Graham Henry as coach last week, Deans came back into Australian consideration when he sent an expression of interest in the Australian position, vacated by John Connolly after the Rugby World Cup.

ARU chairman Peter McGrath then requested that the selection panel, which interviewed five Australian candidates a month ago, should go through the same process with Deans.

The 48-year-old Canterbury Crusaders coach was then interviewed on Wednesday in Sydney.

“Robbie comes with a superb record and I am delighted to announce he will be joining the ARU,” McGrath said.

“In terms of our playing ranks, we are on the doorstep of generational change. We believe Robbie Deans is the man to move us into that new era.”

Deans was expected to make his first official comment on the new position on Saturday.

“He’s got a wonderful coaching record, and I think he will bring something different to rugby union in Australia,” Fisher said.

McKenzie said he looked forward to working with Deans.

“He’s got a great Super rugby record and Australia can learn a lot from his New Zealand background,” McKenzie said in a statement.

Nucifora, the leading contender before Deans came back into consideration, said he did not wish to comment.

Muggleton could not be reached while Jones was holidaying overseas.

Australia lost to England in the quarterfinals of this year’s World Cup in France.

Chief executive Chris Moller of the New Zealand Rugby Union said the union was disappointed to lose a coach of Deans’ caliber, but understood his desire to work at an international level.

“In an ideal world we would be able to retain all of our top coaches in this country but we have seen over a number of years that the depth and talent of coaching in this country means that we can’t keep all of them coaching in New Zealand and still meet their aspirations for higher coaching
opportunities,” Moller said.

“Robbie has made a substantial contribution to New Zealand, Crusaders and Canterbury rugby as a player, manager and coach over a long period of time.

“We believe it is only fair that he be given this opportunity, despite the obvious concern about losing one of our top coaches to another country’s national team.”

Moller said the union’s board had decided on Wednesday that Deans could continue to coach Canterbury in 2008 “subject to a number of protocols being agreed and the resolution of contractual terms.”

“He’s got the ability to understand the team and what players he’s got and how he’s going to work with that to get the best out of it.”

Deans played fullback for the All Blacks, appearing in five tests in 1983 and 1984, scoring 50 points. 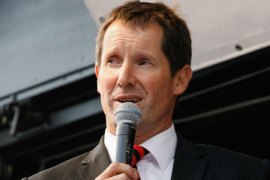 The selection of Robbie Deans as Wallabies coach is unlikely to be the popular choice.