A senior Iraqi football official has announced that the three Iraqi footballers and an assistant coach who abandoned the Olympic team in Australia to seek asylum there will never be allowed to represent their country again.

The four disappeared in Sydney last month, one day after Iraq lost to Australia 2-0 in a Group A qualifying match for next year’s Olympic Games in Beijing.

Australia drew 1-1 at North Korea the following week to top the group with 12 points, one ahead of Iraq, which failed to qualify despite a 5-2 win against Lebanon in its final group match.

“We penalised the players because they left the team before the qualifying campaign was complete. They put their personal interest ahead of the interest of the team and the fans,” said Tariq Ahmed, the deputy secretary general of the Iraqi soccer federation.

Meanwhile, English singer Elton John is backing an appeal by Watford midfielder Alhassan Bangura against the British government’s decision to deport him.

The 19-year-old Bangura was denied permission to stay in Britain this week after an asylum and immigration tribunal ruled that he exaggerated the risk to his life if he returned to Sierra Leone.

“I am just praying every night that the Home Secretary will review this and allow me to stay because, inside of me, I know I’m supposed to be here,” Bangura said.

Bangura was reportedly smuggled into Europe at age 16 by human traffickers. 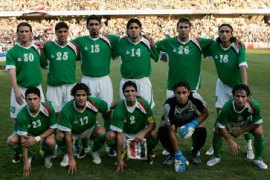 Three Iraqi players and an assistant coach stay in Australia.