Brazilian striker Robinho scored one goal and set up two more to lead Real Madrid to a 3-1 victory over Lazio and into first place in Group C of the Uefa Champions League.

The 23 year old fed Julio Baptista for the first goal in the 13th minute, and Raul Gonzalez headed in the Brazilian’s cross two minutes later.

Robinho ran on to Ruud van Nistelrooy’s touch pass from the right of the penalty box in the 36th before poking a right-foot shot past Marco Ballotta inside the near post.

“He’s a great player and the truth is between his time with Brazil and with us, he is having a great season.”

Goran Pandev scored a consolation goal for Lazio in the 81st, and Madrid goalkeeper Iker Casillas dove correctly to his left to deny Tommaso Rocchi from the penalty spot three minutes into injury time after center back Pepe was whistled for a hand ball.

Madrid won Group C with 11 points, while Lazio missed out qualifying for the UEFA Cup after finishing last with five points.

“We’ve made it past the first hurdle, to make it to the next round, so I’m not going to worry about who we get (next),” Schuster said.

Madrid improved to 21-7 in European Cup elimination matches at the Santiago Bernabeu.

Meanwhile, they will be joined from the group stage by Olympiakos after Ieroklis Stoltidis scored two goals and set up another to help defeat Werder Bremen 3-0.

Stoltidis scored in the 12th minute, sending a volley from outside the area past Bremen goalkeeper Tim Wiese.

Darko Kovacevic added another in the 70th, heading in a free kick from Stoltidis.

“I think we deserved it. We’ve been playing well throughout the tournament, even when we didn’t get the results. We always believed in ourselves, that was key for us,” Stoltidis said.

“We have to keep playing at this level and who knows what we can do.”

It was the first time in eight years that Olympiakos advanced to the knockout stage.

In 1999, the Piraeus club reached the quarterfinals before losing 4-0 to Juventus. 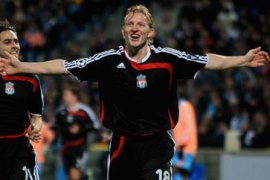 The Reds rout Marseille to book their spot with Porto, Chelsea and Schalke.