Sri Lankan captain Mahela Jayawardene smashed an unbeaten 167 to become his country’s highest scorer and the first batsman to cross 7,000 in test cricket as the hosts took a 28-run first innings lead against England at stumps on the third day of the second cricket test.

The 30-year-old went into the match needing 111 runs to beat newly retired Sanath Jayasuriya’s 6,973 runs from 110 tests and formed long partnerships with Michael Vandort and Chamara Silva to help his side recover from some early staggers.

Walking to the crease on the second day with his side struggling on 22-2, Jayawardene combined for a 227-run stand with Vandort, who made 138 runs.

They finished the day at 379 runs for the loss of four wickets.

Vandort took advantage of a dropped catch on 15 by Alastair Cook, spent 259 balls and hit 18 fours and a six for his fourth test century before being trapped lbw to left-arm seamer Ryan Sidebottom shortly before tea.

Resuming the final session on 120, Jayawardene batted aggressively and lofted left-arm spinner Monty Panesar over long-off for a six to reach 150.

After Vandort’s dismissal, Jayawardene and Silva shared a 128-run stand for the fourth wicket.

Shortly before, close pace bowler Steve Harmison bowled a fast rising delivery which flew off Silva’s bat for a catch to Ravi Bopara at gully.

The century was Jayawardene’s 20th in test cricket, coming in his 92nd match.

The English bowlers struggled through the day but could get only two wickets for 274 runs.

Sidebottom had 3-70 at stumps while Harmision recorded 1-67. 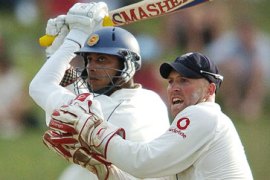 Michael Vandort and Mahela Jayawardene get their side back in the match.