Pakistan batsman Misbah-ul-Haq hit his second successive century as the third and final test match against India rumbled towards a draw.

Misbah followed up his 161 in the second test with a composed 133 not out to boost Pakistan’s first innings score to 537, just 89 short of India after being confronted with a follow-on threat at one stage.

India, which scored 626 in its first innings, had increased the lead to 220 before stumps on the fourth day with Sourav Ganguly batting on 63 and Rahul Dravid on 35.

Leading 1-0 by clinching the opening test match by six wickets, India is poised to win its first home test series against Pakistan in 27 years.

Out of four subsequent series on Indian soil, Pakistan’s touring teams won one and drew three.

Resuming at the overnight score of 369-5, Misbah and Akmal shared a defiant 144-run stand for the sixth wicket that Pakistan past the 427 mark required to make India bat again.

Akmal was the more attacking of the pair Tuesday, smashing 12 boundaries off 114 balls before being stumped by Dinesh Karthik off spin bowler Harbhajan Singh.

Misbah completed his century by glancing Singh to fine leg but watched the lower order crumble against young pacer Ishant Sharma, who returned figures of 5-118 in only his second test.

Drafted into the Indian squad after four front-line fast bowlers reported injuries, the 19-year-old Sharma capitalized on the opportunity by dismissing the last four batsmen for just nine runs in his final spell.

Playing in his 10th test match, the resolute Misbah followed up his rescue act in the drawn second test, when his partnership with Akmal helped Pakistan avert the follow-on.

India earned the dubious distinction of conceding the highest extras in a test innings with the sundries mounting to 76, surpassing the previous world record of 71 by the West Indies against Pakistan at Georgetown in 1988.

The extras amounted to third highest contributor in Pakistan’s score, next only to Misbah and stand-in skipper Younis Khan (80), who is leading the team in place of injured tour captain Shoaib Malik.

Rookie Yasir Arafat made 44 and helped Misbah add 93 runs for the seventh wicket before being clean bowled by Sharma, who then removed Mohammad Sami (1), Shoaib Akhtar (1) and Danish Kaneria (4) in quick succession.

Ganguly produced another authoritative knock to follow his career-best 239 in the first innings, hitting one six off leg-spinner Kaneria and nine boundaries from 89 deliveries. 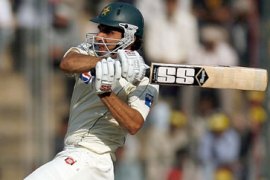