Anil Kumble has retained as India’s captain for the four-test series in Australia starting later this month.

India selectors delayed the announcement of the squad to December 12 due to injuries to several pace bowlers, but have retained Kumble as captain.

The 37-year-old led India to a six-wicket victory against Pakistan last month in his first test as captain after Rahul Dravid resigned in September.

In his 121st test in the third and final match starting Saturday, Kumble will be looking to clinch a series victory over Pakistan on his home ground in Bangalore.

India leads 1-0 after the second test in Calcutta ended in a draw earlier this week.

Having played for India since 1990, Kumble is the country’s highest test wicket-taker with 578.

Indian cricket selectors named a 14-player squad for the third and final test against Pakistan starting on Saturday.

Apart from the naming a 14-player squad the Indian selectors also chose 24 probables for the test tour of Australia. 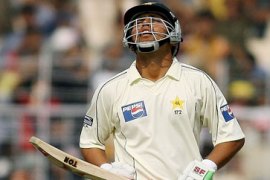 India and Pakistan end in draw

India will take a 1-0 lead into the third test after Pakistan hold on.