Pakistan’s Younis Khan hit a masterful unbeaten century to lead his team to the safety of a draw in the second test against India.

The stand-in skipper scored 107 and shared in an unbroken 136-run stand for the fifth wicket with Mohammad Yousuf (44) to help the visitors recover from 78 for four on an thrilling final day.

The visitors finished on 214-4 after being set a challenging target of 345 on a deteriorating Eden Gardens pitch to keep the series alive.

The result means India, who are 1-0 up after winning the opening test in New Delhi by six wickets, cannot lose the three-match series.

“We would have liked to make it 2-0 here but you have to give it to Pakistan for the way they batted,” Indian skipper Anil Kumble said afterwards.

“Misbah (ul-Haq) and Kamran (Akmal) in the first innings and (their batting) also in the second innings.”

“We wanted to finish the series here and had a great opportunity. But we go to Bangalore 1-0 up and we’re looking forward to a 2-0 series victory,” Kumble said.

Younis and Yousuf, the mainstays of Pakistan’s batting after Inzamam-ul-Haq retired earlier this year, dug in for 37 overs to thwart India in a display of solid technique and terrific concentration.

Younis, faced 182 balls in his 214-minute effort for his 15th century and the fifth against India.

The hosts had declared their second innings closed on 184-4 after adding 43 runs to their overnight total for the loss of two wickets.

However, first-innings centurion Kamran Akmal (14) and Salman Butt (11) kept India at bay for nearly an hour before leg-spinner Kumble dismissed Akmal with the second ball after lunch.

Pacer Munaf dismissed first-innings centurion Misbah-ul-Haq for six in his second spell in the second session, to give India a scent of victory.

Kumble and off-spinner Harbhajan Singh, who took five wickets in the first innings, operated with a minimum of three fielders in catching positions to pressure the batsmen but Younis and Yousuf batted out 143 minutes together to force a draw.

Ganguly passed 6,000 test runs during the course of his innings.

Misbah scored a career-defining 161 not out before Pakistan were bowled out for 456 in their first innings on Monday in reply to India’s 616-5 declared.

Wasim Jaffer, who scored a double century in the home team’s first innings, was adjudged man of the match.

The final test starts in Bangalore on Saturday. 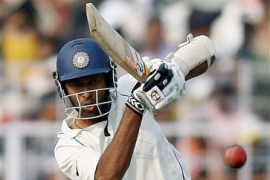 India are 352 for 3 as Pakistan struggle on day one of the second Test in Kolkata.