Portsmouth manager Harry Redknapp has returned to the club’s training ground, a day after his arrest in the long-running investigation into allegations of corruption in Englishfootball.

Redknapp, who was arrested along with Portsmouth chief executive Peter Storrie and three other men, joined the players at the club’s training complex to prepare for Saturday’s Premier League fixture against Everton.

The five were arrested by City of London police on suspicion of conspiracy to defraud and false accounting as part of a probe into corruption in player transfer dealings.

All five were released on bail until February.

“We all helped the police with their inquiries, but it doesn’t directly concern me, it’s other people involved,” Redknapp said after his release night from Chicester police station.

“I think that’s the end of it. I’ve been answering questions to help the police. I am not directly concerned with their inquiries.”

Paul Martin, the lawyer representing Redknapp and Storrie, said the two were cooperating with detectives.

“They are ongoing investigations in relation to those other individuals, and for that reason they (Redknapp and Storrie) are unable to comment further, and there is nothing that they can discuss.”

Redknapp had been considered a potential leading contender for the England coaching job after Steve McClaren was fired following England’s failure to qualify for next year’s European Championship.

Mandaric’s aides confirmed his arrest and said he was cooperating with the inquiry.

Mandaric, who sold his controlling share in Portsmouth to Russian businessman Alexandre Gaydamak in July 2006, was also questioned on suspicion of money laundering.

Up to 60 police officers were involved in Wednesday’s raids on eight locations, including Redknapp’s luxury home.

The probe is believed to be centred on Faye’s transfers from Auxerre to Portsmouth in August 2003 and from Portsmouth to Newcastle in January 2005.

Redknapp’s arrest was the most dramatic move in an investigation which has been going on for two years.

The Premier League instigated a separate inquiry by former London police chief John Stevens in March 2006 after allegations that managers, players or agents had been taking kickbacks from player transfers.

In July, police searched the offices of Portsmouth and Newcastle and Scottish club Rangers, along with the homes of two people, as part of the investigation. 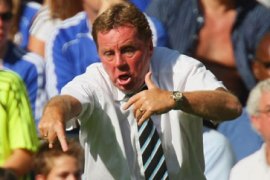